. . . where we took full advantage of the new play area near the C gates in the main terminal before boarding our flight.

Flying direct was nice in many ways, but it did make for a long time in the air.  I was hoping someone’s nap would be closer to two hours rather than less than one, but at least he took a nap, and we managed the rest of the time without too much trouble.

I’m very glad we chose to put him in the car seat on the plane, as having a structured place (vs. swimming in an adult-sized plane seat and/or squirming all over our laps) really helped, both with napping and in general.

A little over four hours later, we arrived in Portland!  Hard to believe we were here almost exactly two years ago, when The Dude was a lot smaller and had a lot less hair. 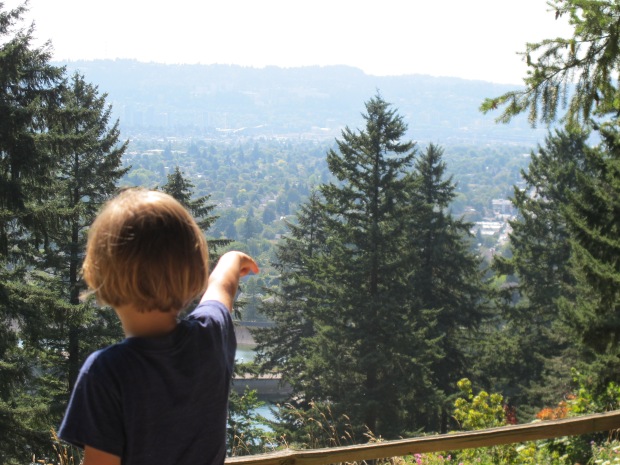 Our “settling in” day involved acquiring food and bicycles.  What more do you need?

After a morning grocery stock-up, we swung by my sister-in-law and soon-to-be brother-in-law’s place to pick up the bikes and trailer we’re borrowing for the week, then biked the five miles back to our rental house (similar to our last visit, we avoided streets with bike lanes as much as possible, sticking to “bike boulevards” (AKA neighborhood greenways) or plain ol’ streets. 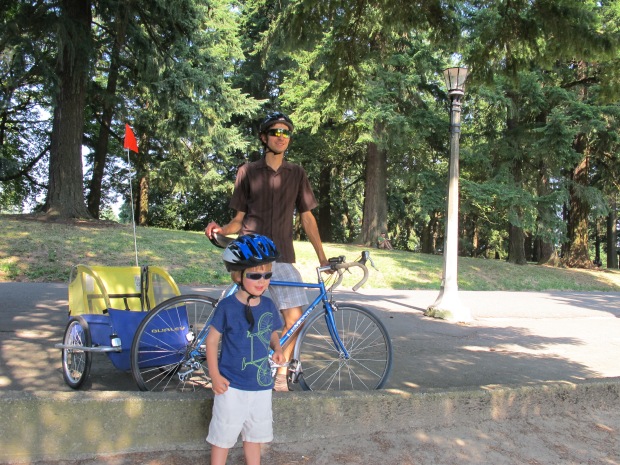 After nap time, we headed out to find a playground for Sir.  The closest playground happened to be located at Mt. Tabor Park, which put our hill climbing skills to the test.  In addition to the playground, we were rewarded with some great views.

We’re looking forward to more outings by bike (being driven around in the rental car made me grumpy and carsick), including renting a Bullitt cargo bike from Splendid Cycles for a day!

Yesterday, Matthew and I enjoyed a day trip to Silver Falls State Park (just south of Portland) for some lovely waterfall-heavy hiking.

We saw eight(!) waterfalls over the course of a 9-mile [loop] hike.

The only downside so far is HOT and no air-conditioning in our rental house, but it cooled off a decent bit yesterday (our hike was not hot, so we weren’t too tempted to go swimming), plus we’re moving to a different rental place that might have A/C and is more centrally located, to boot!*

*We’re not relocating because of the A/C, but rather had planned previously to spend the first few nights at my MIL’s rental before moving to our own place.