Digging out
Last Friday, with our street still sloppy, the UPS truck finally made it down our street (two days late) to deliver my new snow boots.  With temperatures in the 40s and 50s, our ten inches of snow is almost entirely gone.  Guess I’ll have to try out the boots later.

On Sunday, we were returning from brunch at my FIL’s when I witnessed not one, but two, rather insane snow-removal methods in my ‘hood.  Method 1 involved using a garden hose to spray water on the snow-covered parts of the sidewalk.  I was still trying to wrap my head around that one, when, less than a block later, it got better.  Method 2 involved a propane tank (like you would use for a gas grill) powering what appeared to be some kind of jury-rigged flame thrower.  The inventor of said device was directing the flame at some ice near the edge of the road.

The kicker is that it was 55º F at that point, so a good old-fashioned shovel, not to mention just leaving it there to melt, would have been more effective and less-wasteful of resources.  We were in a bit of a time crunch to get Sir home for his nap, or else I would definitely have photo evidence of Method 2.

Open with care (and don’t EVER ride in the door zone)
Saturday afternoon we took Sir to the zoo.  I snagged a street parking spot and proceeded to almost take out a kid (couldn’t have been more than fourteen) on a bicycle.  Since the very dangerous practice of door zone cycling is relatively common, I do try to check before I open the car door, but this particular time, I didn’t.  Fortunately, the kid swerved out of the way — very fortunately not into the path of an overtaking vehicle.  I don’t know if I would have even been aware of the near disaster if not for his startled, “Oh, shit!” as he swerved and rode on his way.  Yikes!

I wanted to give him a CyclingSavvy card, but I didn’t react quite quickly enough to run after him.  There was, however, a suspiciously similar-looking bike locked up outside the zoo entrance, so I tucked one of the cards into the helmet.

Aldi by bike
The clear roads mean that biking is a go once again.  The amount and longevity of snow and ice so far this winter is making me rethink not needing snow tires.

Yesterday, I road my bike to my nearest Aldi grocery store.  For various reasons (I’ll save my thoughts on Aldi for another post), I had never visited this Aldi location, despite living just over a mile away for a year-and-a-half.

The trip was mostly an excuse and motivation to step away from the computer and get outside for a bit, spurred by their weekly advertisement mentioning that they now carry [some] organic produce.  I bought some citrus fruit (the main item on my list) and a couple of other items, which ended up filling the milk-crate on my bike.

Working girl
For the past week, I’ve been rather busy with paid work, which means spending a lot of time with Microsoft Office products, completing tasks that require a good deal of focus and attention to detail.  This is something I do well, but it leaves my more creative side (including the ability to write here) locked-up and whimpering in the corner, hard-pressed to produce, even if I did want to spend more time in front of the computer.

Between Thanksgiving travel and the fact that I work from home and walk Gabriel to childcare a half-block away, trips by bike have been pretty minimal.  I rode to my [final?] PT appointment last Wednesday in fifty degree temps, and by Friday our streets were covered with a fun mix of ice and snow.

Not much ice and snow by most standards, but enough to make things interesting in a city that doesn’t plow or salt the side streets.  I don’t mean that these streets don’t get priority, I mean that these streets, including the street we live on and many of the surrounding east-west streets, don’t get plowed or salted EVER.  If it stayed below freezing until April, snow and ice that fell in December would STILL be there.  Fortunately, St. Louis winters tend to be pretty mild, current unseasonably cold December temps notwithstanding (ahem), and the ice usually melts in a somewhat reasonable amount of time.

Six-days post-precipitation most of the streets are clear, but, as of this morning, our street still had significant ice.  Matthew’s been busing to work since last Friday, and I’d been delaying errands, hoping for just a bit more thawing so I could get around by bike instead of resorting to the car.  We’ve both been missing the regular dose of physical activity!

This morning, I finally decided that enough was enough — it was time to venture out on the bike.  The view of our alley from my handlebars looked a bit dicey.

This was by far the worst I encountered, and, despite a couple of deceptive clear patches, I didn’t even attempt to ride in the alley.  Instead, I walked my bike to the street, where I found [almost] nothing but clear pavement.

The risk, of course, is that a small patch of ice that would be completely inconsequential in a car can be a big deal on a bicycle.  I rode a total of two blocks that had a decent bit of ice on the roadway, and I rode very slowly and cautiously, sticking to the clear pavement in the tire tracks.  Other than those blocks, I stuck to larger, completely clear roads.

Given the roads I was using, and my flexible schedule, I realized later that I could have waited until after morning rush hour to run my errands, but the timing/heavy traffic thing didn’t occur to me in my haste to get out the door and on my bike.

It looks like our roads will be mostly clear just in time for some more wintry mix this weekend (boo, hiss).  I consider myself an [almost] all-weather cyclist, but I have a long way to go before I join the ranks of Miss Sarah.  On the other hand, it’s hard to feel like going to great lengths to prep for winter-weather riding in St. Louis, where we have relatively little snow.  Perhaps I just need to move somewhere with no winter weather!

I don’t mind the work involved in shoveling snow (especially not the relatively small quantities we get around here), but it presents a bit of a dilemma to my green sensibilities.  Sure, it’s the neighborly thing to do, but a shoveled walk almost always requires some salt to keep the newly snow-free pavement from being covered with hazardous icy patches, whereas the snow on an unshoveled walk usually provides plenty of traction, even if there is a layer of ice underneath.  The salt is not exactly the best thing environmentally, as it can harm plant life and usually ends up in the water supply, not to mention speeding the demise of the sidewalks themselves.

I dutifully, though somewhat guiltily shoveled the sidewalk in front of our building after the first two snows of the winter and pondered my dilemma during many snowy walks to the Y.  Assuming you’re an able-bodied individual with a decent pair of boots, walking on snow-covered sidewalks is not that big of a deal — I’d rather walk on the snow than on cleared, but unsalted and icy surfaces.

However, I realized that in addition to leaving out those who didn’t have (perhaps cannot afford?) boots, my thinking also left out people using wheelchairs, walkers, or other assistive devices to get around. I imagine snowy sidewalks are no fun for these folks.  People walking with small children would also fit in this category of “maybe not so easy to just tromp through the snow.”

Since I am all about promoting alternative and active means of transportation, I conclude that shoveling, along with the requisite and maybe not-so-green salting, is the best option.  That said, I use a light hand with the salt and don’t use salt for what could be accomplished with a shovel  — no need to overdo it!

What are your thoughts on shoveling?  Have you used any eco-friendly salt alternatives?  If so, are they effective?

Despite the scary road conditions for our trip to Iowa on Christmas Eve day, the snow made for a lovely white Christmas . . . and some fun sledding.

When we arrived at the sledding hill, I was surprised to find that we were the first to make tracks there.   Our sledding hill is in a cemetery — if you look closely, you can see the headstones in the background. 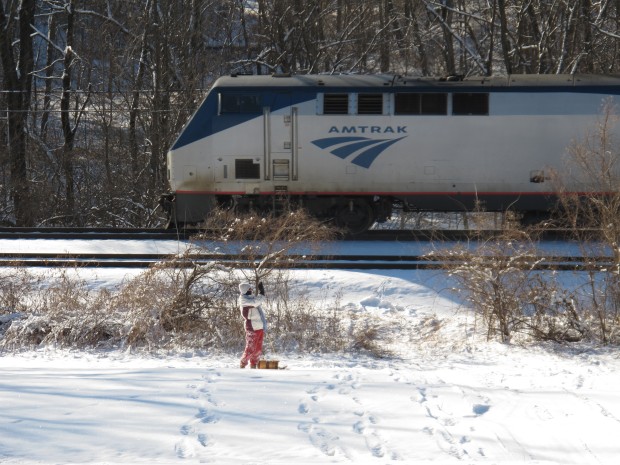 Train tracks at the bottom of a sledding hill?  Not dangerous at all 😉  Just remember to bail (and don’t wear a white coat because it might get grass stains if the snow is only a few inches deep).