I think we’ve gotten to the “too much of a good thing” point with summer vegetables.  The tomatoes, squash, and eggplant won’t quit coming.

I’ve made and canned tomato sauce and salsa and made “sun-dried” toms with the food dehydrator.

Monday I made an amazing lasagna (recipe coming once I dig out from underneath all the produce), but I’m running out of steam.

I hate to complain, and I REALLY hate to waste food,  but, gah, I just want out of the kitchen!  Any suggestions or inspiration?

In an effort to use up a little vacation time, and give myself a couple of “me” days, I took the past two Mondays off.  Relaxation efforts on the first Monday?  A big fat FAIL.

I told myself I would do better this past Monday.  That all flew out the window when I foolishly offered to deal with our latest tomato harvest, which included my first foray into pressure canning.*

Instead I spent the day cutting tomatoes, 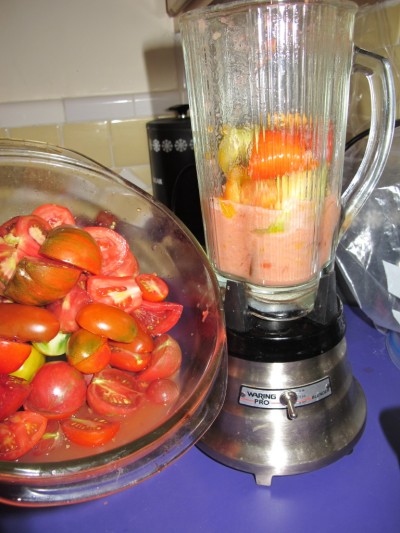 And cooking them into sauce,

So I could cancan can.

I watched nervously as the pressure built, fearing the worst (broken jars) as I heard some suspicious noises from inside.

Nothing to do but wait.  Eleven pounds of pressure for fifteen minutes, them time for it to fully depressurize.

No tomato vomit, i.e., tomato bits floating in the canning water, indicating certain jar breakage.  I still held my breath as I removed the jars, since sometimes a jar can crack, but remain more or less intact until moved. 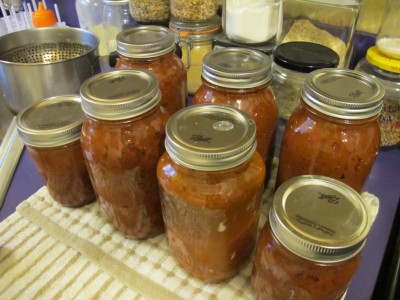 All intact!  Of course, I kind-of overshot my goal of cooking the tomatoes down enough to only have to do one round (seven quarts) of canning.  My super thick sauce only yielded five quarts, which I divided into four quart jars, two pint jars, and a pint-and-a-half of tomato juice to give me seven jars for a full load.

So, relaxing Monday FAIL, but canning SUCCESS.  I’ll take it.

*We bought the pressure canner last summer, right before Pookie arrived.  Matthew used to can a few batches of green beans, but I was pretty out of commission during that time.  Matthew’s mom handled all of the tomato canning last year (water bath method), and she’s done a ton of it for us already this season.

I typed the title with a little song running through my head.

On Tuesday night, I chopped up a bunch of tomatoes.  Matthew handled the onion, garlic, and hot peppers (much to his chagrin on that last ingredient — multiple hand washings still left behind residue that made it into his eyes). 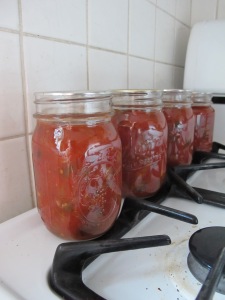 When Matthew suggested adding peaches to our Caprese salad last week, I reacted with a bit of skepticism.  However, having recently read Emily’s post on combining tomatoes and peaches, I was willing to give it a try. 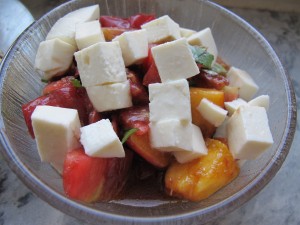 Chopped tomatoes and peaches with fresh basil, balsamic, olive oil, mozzarella cubes, and s&p.  The verdict?  A refreshing and fun twist on a Caprese salad — we’ll still eat the traditional, non-peach, version most of the time, but we enjoyed the change.

I made a lentil and millet pilaf to round out the meal, with whatever fresh veggies struck my fancy (carrots, garlic chives, yellow squash, orange bell pepper), dressed with some garlic olive oil*, a bit of red wine vinegar, and some s&p.  I stirred in some Dijon mustard at the end, one of my new favorite ingredients.  Plus some avocado (so NOT local) for added deliciousness!

* To make garlic olive oil, simply pour some olive oil in a jar and add a couple of cloves of minced garlic (a garlic press comes in handy here, but you can also just chop it up very small).  For maximum flavor, let sit a couple of days before using.  Keep refrigerated.  A little bit goes a long way, and at a fraction of the price of buying the Garlic Gold Oil that I’ve read about on KathEats.
—
Entry to Nupur’s Blog Bites 6: Potluck Edition. 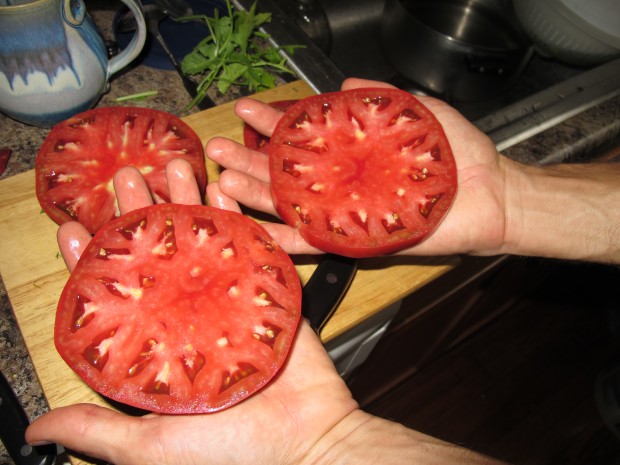 This meal featured heirloom varieties of tomatoes and beans.  I steamed extra beans when cooking a previous meal, so the purple and green beauties were ready to add to the salad: arugula,  sunflower seeds, dill goat cheese, and homemade honey mustard dressing.

The tomatoes hide the pesto (also made in a big batch ahead of time) on the pasta, but it’s there.  With some of the prep work (snapping and steaming beans and making the pesto) done ahead of time, we created a delicious and elegant meal in no time at all — perfect for a busy weeknight!