I came across this article as I perused the November issue of Sauce :

And now I’m faced with a dilemma.  You see, I was so planning on being a snotty vegetarian this Thanksgiving.  The experience would look great on my resumé, right up there under “Snotty Bicycle Health Freak.”  Heck, it may be just what I need to get my resumé noticed.

But now that I’ve made a batch of the vegetarian dumpling soup from the aforementioned article, I feel like I really have no excuse.

As much as I enjoy my chickpea flour dumplings (great flavor plus a nutritional boost from the bean flour), I’m glad I opted to follow the recipe and try something new.

As usual, I didn’t follow the recipe too closely: whole wheat pastry flour and butter for the dumplings, and lots of variations when it came to the soup/stew, but that’s the beauty of a soup.

I didn’t roast any veggies for my soup, but I did have some roasted veggie broth on hand from deglazing a baking tray earlier in the week.  I’d used [most of] our leeks in another soup, so I just used onion, plus a bit of leftover leek greens (yes, you can those). 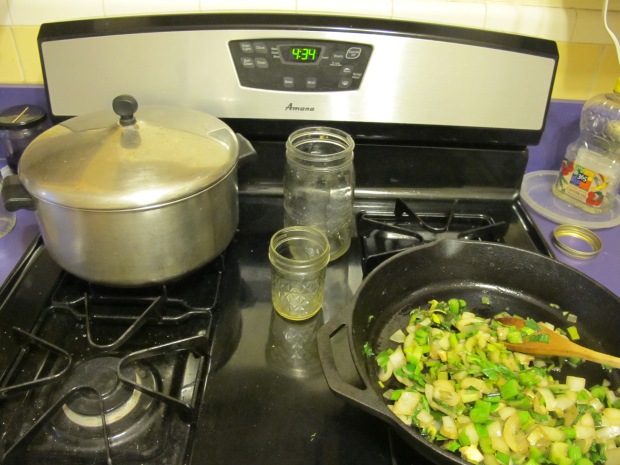 Instead of carrots, I used sweet potato, which I adore in soup, plus that’s what we had on hand from the garden.  I’m still figuring out how to hit that  sweet spot with the sweet potatoes: melt-in-your mouth tender, but not mush.  These were close, but a little overcooked.

I used lima beans instead of the called-for cannellinis.  I really liked the limas, but a white bean would definitely work, as would garbanzos.  Either way, I applaud the author’s decision to skip fake meat (she said snottily).

The dumplings were beautiful, fluffy little pillows that rounded out the soup nicely.  To avoid soggy leftover dumplings, cook as directed, then immediately transfer the cooked dumplings to a separate dish and refrigerate in a separate container (i.e., not sitting in the soup).

Since I made this soup late last week (and just finished the leftovers for lunch yesterday), I most likely will not be using this recipe for Thanksgiving this year.  Instead, I’m thinking something featuring tempeh, and I’m browsing recipes, including those here and here, for inspiration.

We found a nice 30-pound bird for our Thanksgiving meal.

“Wait a minute,” you say, “I thought you guys were vegetarians.  What are you doing eating turkey?”

We’ve always said if we WERE to return to eating meat, it would be from animals raised humanely, with organic practices and plenty of time in pasture, supplemented by high quality feed, if necessary.

. . . whose diet was supplemented with only the best home-grown food.

Plus a few treats to really fatten him up . . .

He looked like he would have some really nice thigh meat . . . 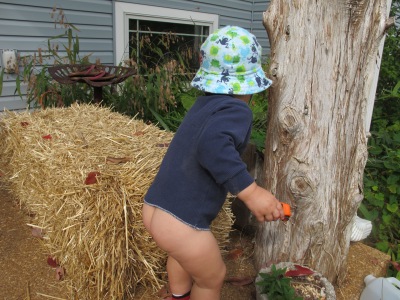 For those of you looking for something other than turkey, come back tomorrow for some vegetarian Thanksgiving menu inspiration.

The past four-and-a-half months have probably been the toughest, most challenging of my life, but in the midst of it, I have so much to be thankful for:

Happy Thanksgiving!  What are you thankful for?

I have never purchased a tofurky, but I have sampled this interesting creation at potlucks, and I did make a homemade “tofu turkey” a few years ago.  It was rather delicious, but it also required quite a bit of work, and with so many other delicious vegetarian options out there, I have not attempted to recreate it.

Whether you’re celebrating a meat-free meal this year, or just need inspiration for some healthy, tasty side dishes, check out this tantalizing plethora of recipes at Well’s Vegetarian Thanksgiving.  Treehugger has some additional offerings here.

If you are doing the turkey thing (or any kind of meat), look for locally raised, pastured birds.  In St. Louis, I know of two sources: Local Harvest Grocery and Fresh Gatherings Cafe.  While it is probably too late to preorder a bird for this Thursday, there’s always Christmas and next year to consider.