It all started out innocently enough.  With the warmer temps, I spent some time cleaning our sun porch on Friday in preparation for being able to use it again soon.

In the process of breaking down a cardboard box for recycling, I pulled off the packing tape, and since I was already outside on my way to the recycling bin at that point, I decided to put the tape directly into the trash dumpster.  I opened the dumpster lid and saw a bunch of brand new looking books.

Unable to just close the lid and go on with my life knowing that some perfectly good books were headed for the landfill, I started pulling them out and piling them on top of the dumpster.

I found about 20 middle school teachers’ guide math texts that looked like they’d never been used.  In the dumpster!  I was tempted to just leave the books piled on top of or next to the dumpster and hope that someone would come along and rescue them, but, realistically, people only tend to pick up furniture and other large objects.

If I left them there, they would probably just sit and end up getting water damage from rain, and then they really would be trash. So I brought them inside in two huge armfuls, found a box in the basement as a temporary home, and posted them on ReUseItStLouis (formerly known as FreeCycle).

They had not generated much interest by Saturday, when I made the mistake of visiting the dumpster again (with another small trash item).  Guess what?  More books!  Same topic and condition as the books from Friday — clearly the same culprit.

My shoulders sagged in defeat.  I could (and did) pull out these books, but this is one dumpster, in one alley, in one city, and I’m one person.  Every day, all across our country, perfectly good and usable items, like these books, get sent to the landfill. 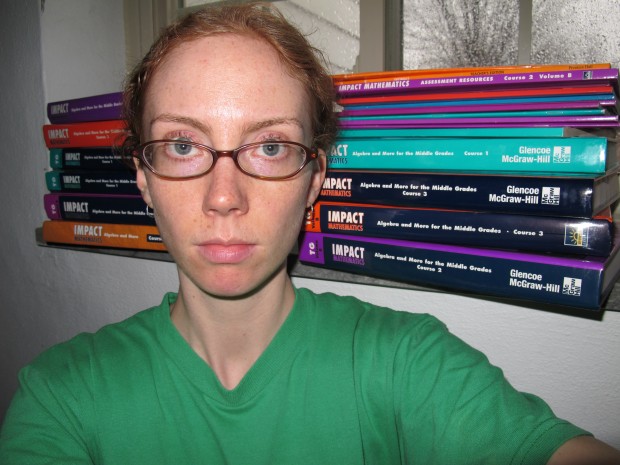 I understand that taking the time to find new homes for items we no longer want does require some effort and can be frustrating, we just went through it with our couch, but taking the time and effort is part of being a responsible consumer.

In this case, the books I rescued would be perfect for a math tutor or a family that home schools.  While this story is not finished yet, I received two emails about the books, including one from a person who seemed very interested.  If all goes well, the books may have a new home by the end of the day, which would turn my distressed expression in the photo into a smile.