Blueberries by the bucket

It’s that time of year again — blueberry season.  Hard to believe, but it’s been three years since we picked blueberries at Huckleberry Hollow!

Two years ago, I looked like this, and I was feeling grumpy, tired, and not at all like being out in the heat for hours picking blueberries.  My MIL and a good family friend generously volunteered to pick for us that summer.

Last year, we didn’t have the option of figuring out the logistics of picking blueberries with an infant because H-Hollow lost their entire crop due to weather conditions.  Yep, zero blueberries.

This year, the blueberries were back, and with Sir in childcare, I made a blueberry picking date with my MIL.

As I mentioned three years ago, this place has some huuuge blueberry bushes, which provide some partial shade for picking.  The bits of shade helped, but by mid-morning it was still scorching!  Why can’t blueberries ripen at a cooler time of year??? 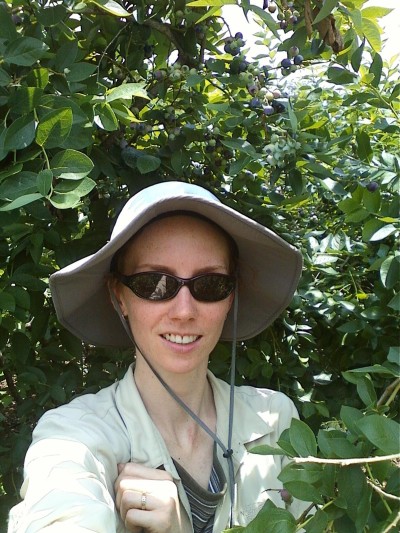 We arrived at nine in the morning and left at one, which meant just over three-and-a-half hours of picking, plus a much-needed twenty minute refuel and rehydrate break.

Between the two of us, we picked almost six-and-a-half gallons of blueberries in that time.  We’ll be enjoying them fresh for the next few days, and the remainder (i.e., the bulk) are in the freezer.

While I didn’t brave blueberry picking with a toddler in tow (heck, I have yet to take him on a Whole Foods/Trader Joe’s run — I’m definitely not ready for blueberry picking!), I look forward to having him along in future years.  The trick to that will be making sure he puts more blueberries in the bucket than in his mouth, lest he meet an end like that of Violet in Willy Wonka and the Chocolate Factory.

This entry was posted in Food and tagged eat local, pick your own. Bookmark the permalink.

9 Responses to Blueberries by the bucket