On the bike: Entrenched edge rider

When I started this blog (almost 6 years ago!), I thought I would be recounting a lot more tales like the one I’m about to share, stories in the “brave cyclist vs. rude, ignorant motorist” genre .  Fortunately, that has not been the case, but every now and then . . . .

Saturday morning found me riding in two central St. Louis neighborhoods, Southwest Gardens and The Hill.  After a quick stop at the library, I headed to The Hill to pick up a couple of items at DiGregorio’s Market (really hope I can get them to add some bike parking!).

The scene: The Hill is a dense, urban neighborhood, mostly single family residential along one-way east-west streets, and small businesses along Marconi Ave.  When traveling north on Marconi, as I was on my way to the store, there is a significant downhill for the first few blocks. 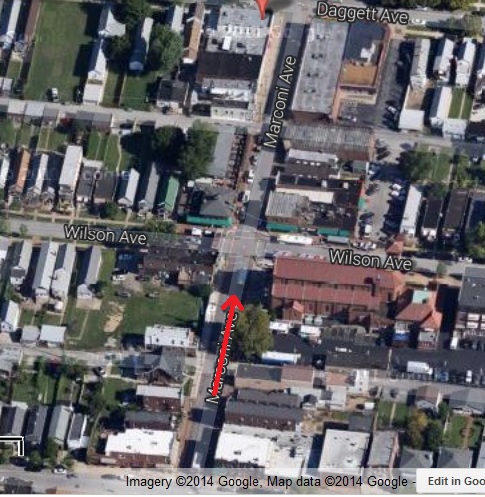 Marconi is narrow two-way traffic (i.e., barely enough room for two small cars to pass one another when cars are parked on both sides), with street parking on both sides of the street, no center stripe, 25 (or 20?) MPH speed limit, short blocks, and all-way stops at every. single. intersection.  So, despite the downhill, this is not exactly the type of street you zoom down, whether in a car or on a bike.

A couple of blocks after turning onto Marconi (and only a few more short blocks to my destination), I picked up on a motorist behind me, giving off an impatient vibe.  With the parking lane pretty solidly full, there was no place for an obvious release, not to mention that, with the downhill, I was already traveling pretty close to the speed of traffic.

Even with no oncoming traffic, the effective width of the street (what was left after accounting for the parked cars on both sides, plus five feet between me and the cars parked to my right), there was really not room for the motorist to pass me on my bicycle.

As I expected, given the road and traffic conditions, I followed him more or less at his exact same speed for two-and-a-half short blocks, until he arrived at his destination.  As he put on his blinker to park, I pulled up next to his window, and po.lite.ly asked him if he was aware how close he had passed me.  (I had rather been expecting a young whippersnapper, but the face looking back at me was a man in his 60s.)

He helpfully informed me that he “didn’t pass as close as I thought he did” (I am the one who judges that, not you, sir.), and “if [I] had been riding by the side of the road, where [I] was supposed to be,” I would have had more space.

I responded that the side of the road was the [mostly-full] parking lane, not a travel lane.

He went on with his parallel parking (with a bit of performance anxiety).  I took a deep breath, pulled my bike up onto the sidewalk (my destination was just a half-block away), and reached into my purse for a CyclingSavvy card.

When he joined me on the sidewalk, I noticed his “Bike Vermont” hat, and asked if he was from this area, or just visiting.  He replied that he was from St. Louis.  I handed him the card and suggested he check out our courses.

He replied that he knows about “people like me,” and the “claim your lane” idea.  He went on to inform me that he knows better, having written “13 books on cycling,” and that it was “cyclists like me, taking up the ‘whole’ road, that make motorists upset.”

At this point, I’m not sure anything I could have said would have made a difference, but I didn’t get a chance to find out, as he rather rudely excused himself to “go get a sandwich.”  He was clearly in a rush to get that sandwich — good thing he arrived at his destination a whole ONE second ahead of me!  (See Reality of Delay.)

I walked my bike to my destination down the block, shaking my head.  I usually don’t engage motorists in situations like this, partly because I often don’t quite catch up to them, but as much because it’s often an exercise in futility and a way to cast an unpleasant shadow on a nice outing.  But sometimes doing nothing is hard, and you never know until you try, right?

I realized later, as I was biking home, that I could hardly expect this man to respect my space on the road, when his “right way” to cycle involves not respecting his OWN space on the road.  Sad, but true.

This entry was posted in Biking. Bookmark the permalink.

7 Responses to On the bike: Entrenched edge rider