Posted on February 9, 2015 by Melissa @ HerGreenLife

Last week I mentioned the kitchen exhaust fan project.  In our previous apartment, we had a working, old-school, built-in exhaust fan in the kitchen.  While probably not quite as effective as a true hood, it was situated right by the [gas] range/oven, and was certainly better than nothing when it came to improving air quality.

While I highly prefer gas ranges to electric, they do have some downsides when it comes to indoor air quality (good paper here).   This might not be a big deal for people who rarely set foot in the kitchen, but we cook and bake A LOT.  After two-plus years of living here with no exhaust fan in the kitchen, we decided we really needed to do something.

The kitchen in our current building HAD a built-in exhaust fan, but it was painted shut when we moved in, and not situated all that well with respect to the stove.  We toyed around with the idea of opening it to see if it worked, but never got around to it.

Back in November, after some particularly fume-y baking sessions, we broached the subject of adding an externally vented exhaust fan with our landlord, J.  He preferred an internal vent hood (which filters the air before recirculating it, but doesn’t remove it), but agreed to look into external venting.  We offered to share part of the cost of the project of getting it vented externally, but he never took us up on that.

In the end, we settled on an over-the-range microwave (J wanted to put in a microwave; we had previously been using our own) with an exhaust fan that could either be internally or externally vented, with plans to hook up the external venting.

Step 1: More power for the kitchen.  For the past two-and-a-half years, we’ve lived with everything in our kitchen (other than the lights) being on one circuit: refrigerator, dishwasher, and all the outlets (that power microwave, toaster oven, and toaster).  The result of this arrangement was that we couldn’t use two high-power draw appliances simultaneously, or we’d trip the breaker.  For example, if the dishwasher was running, we couldn’t use the microwave.  Or if I was heating something in the microwave, I couldn’t toast a piece of bread.

If we’d discovered this before we moved in, we would have made our tenancy conditional on it being fixed, but no.  We didn’t discover it until we moved in, and, at that point, J didn’t seem terribly interested in upgrading things.  I didn’t feel like pushing the issue because within two weeks of our move-in, the refrigerator died.  After J replaced that, I wanted to lay low for awhile, so as not to be that tenant.

While somewhat annoying, we’d adapted to the kitchen power situation fairly quickly, with a strict “one appliance at a time” policy.  Given J’s earlier response, I was rather surprised when, at the beginning of this project, he brought up that the first step would be getting more power to the kitchen.  I don’t know that the exhaust fan draws all that much power, and thereby wasn’t sure why we suddenly needed to change things now, but I wasn’t going to argue.  Most of the work happened when we were out of town at Christmas, with a bit of additional work later.

Step 2: Acquire and install the microwave.  The model J selected was back ordered, but the delay gave him time to do the wiring.  The microwave arrived in mid-January.  J bumped up the over-the-range cabinets to make room for the microwave underneath.  The space the microwave now occupies used to be bare, light-colored wall, so this darkens things up a bit, but that’s a trade-off we can live with. 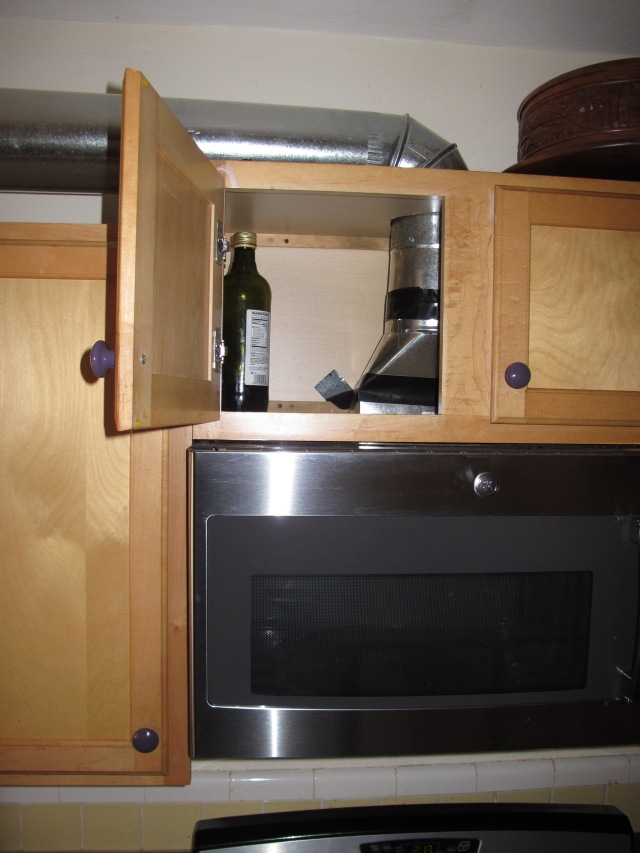 Step 3: Duct work for external venting.  This required that we lose a little bit of actual cabinet storage space, as well as the above-cabinet space that we’d been using to store some larger kitchen items.  Storage space in the kitchen is a premium, but this was worth the trade. 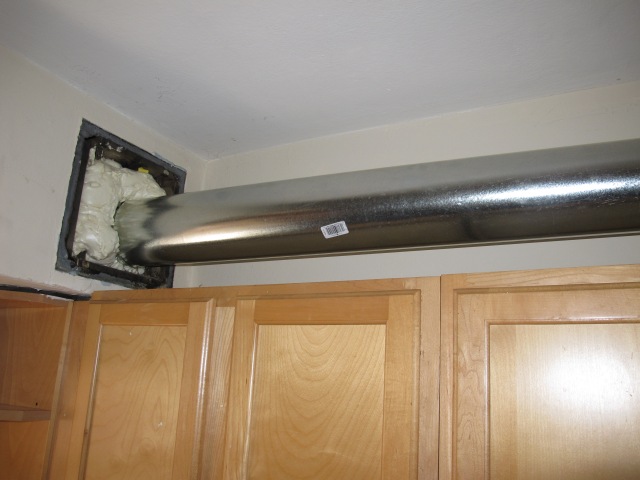 J removed the old exhaust fan and used that space as the outlet for the duct work for the new fan.  As you can see, the project isn’t quite finished, but we have a functional externally vented, over-the-range hood, which is huge!

Having power to actually run multiple kitchen appliances at the same time is also huge.  It took me a couple of weeks to adjust to the idea that I could, in fact, toast toast a piece of bread and heat something in the microwave at the same time.  After a month to adjust, it sometimes feels a little odd, like I’m doing something forbidden when I use the microwave while the dishwasher is running.

We haven’t really put the exhaust fan to the test yet.  Of course, many of the pollutants it will remove are of the colorless, odorless variety, but there should be some improvements we notice.  I don’t know if it was real, or just in my head, but there have definitely been some times when I’ve spent a lot of time in the kitchen with the oven on and seemed to notice some effects on my lungs and breathing.  Now that it’s done, I only wish we’d done it sooner!

This entry was posted in Food, Health and tagged apartment. Bookmark the permalink.