That title sounds like the name of a Big Bang Theory episode, but unlike Sheldon in the t.v. show, neither Matthew nor I have a favorite spot on our couch, because it has become decidedly uncomfortable.

To review, this is the estate sale couch that we bought in late 2010 and had re-stuffed in the fall of 2011.  What seemed like a good purchase now seems much more questionable — we have gotten five years of use our of it, but I’m afraid it’s time has come. 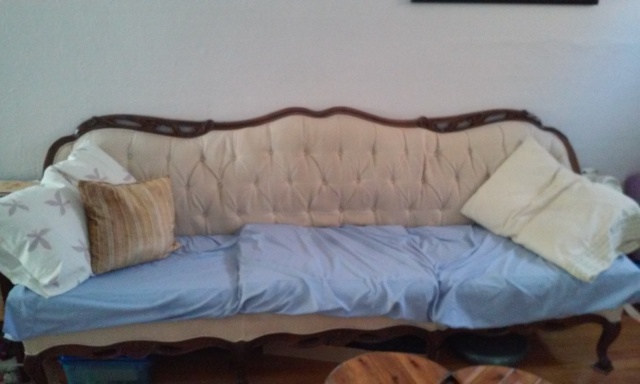 All-in-all, it’s time for this couch to go.  The question is, what next???

The problem with couches

With all of that in mind, we’ve been considering some other options.

Any of these set-ups, done nicely, would be a noticeable investment, but much, much more affordable than the fabled ergo-eco-couch.

The first two options are floor-based, which would be a little tricky due to the large baseboard air-return along the wall where we currently have our couch.  We’re also not certain we’d like the floor-based option for sitting.  We would ideally try out a tatami mat before going this route, and I’m not sure that’s possible, locally.

The bed or daybed options would be plenty comfortable for prone positions, but again, maybe not so much for sitting.  The recliner is probably the best sitting option, but not so great for cuddling.

Is there something that is decent for reading and watching t.v. in both sitting and prone positions?  Maybe combining two or more of the above ideas?  Whatever we get, I want both a color that hides dirt and has some kind of removable cover for easy, regular cleaning.

Have any of you experimented with couch alternatives?  What is/was the set-up, and how did it work for you?

This entry was posted in Green Ideas, My Life and tagged apartment living. Bookmark the permalink.

3 Responses to The couch conundrum