For some reason, a post I read over two years ago, about a Japanese man who used only one mug for over 30 years, has really stuck with me.

We have several pieces of beautiful, functional pottery that Matthew bought during his time in Utah: a plate, a bowl, something in-between a plate and a bowl, and two mugs.  We tend to reserve the plate, bowl, and bowl-plate for special occasions because we hand wash them rather than putting them in the dishwasher.

The mugs, on the other hand, serve as our water glasses, and have been part of our everyday lives, something special in the ordinary.  With their large volume, they are also perfect for heavy drinkers like us.  (We also hand wash the mugs, but they just have water in them, so we don’t actually wash them all that frequently.  And by “not that frequently,” I mean less than once a week.)

While the reality is that we have a shelf and a half of glasses and mugs in our cabinets, in practice, we are somewhat like the Japanese man with his one mug.

One fateful night back in September, we were up with Gabriel.  After changing Gabriel’s diaper and handing him off to me for a feeding, Matthew went into the kitchen to get a drink.  When I heard the crash, my heart dropped, knowing immediately that our pair of mugs was now down to one.

At the time, one of the lowest of the postpartum period, the broken mug seemed like a metaphor of my life since July 9th: my birth plans shattered and life as I’d known it broken, hopeless, unrepairable.

The thing is, we knew that using the mugs meant an increased chance of breaking the mugs.  Instead of sitting in the cabinet, collecting dust, we enjoyed this piece of art every day for over five years.  The one intact mug remains in daily use, though it is a bit lonely without its mate. 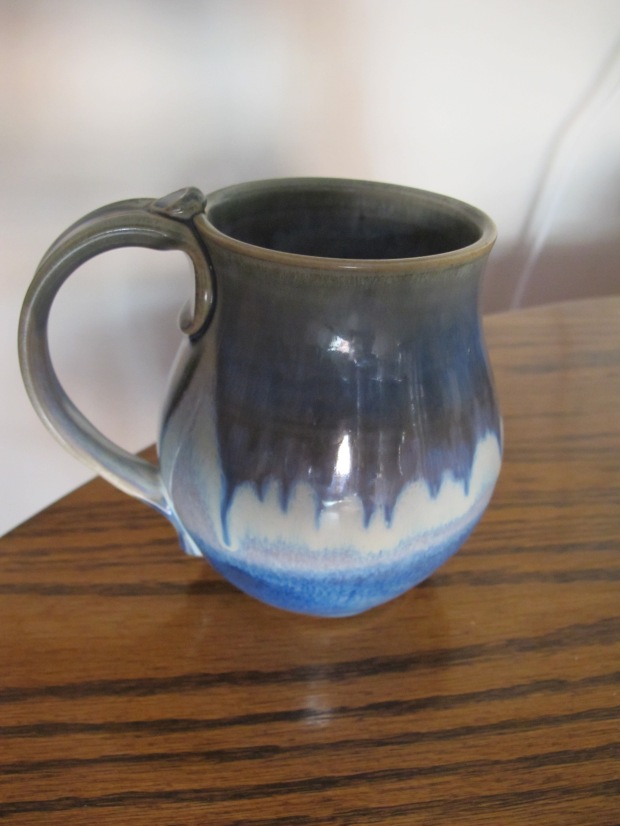 Matthew contacted the artist, and they may be able to make us a replacement.  Part of me thinks it’s silly, what with all the other cups and mugs we own, but another part of me understands enough to not really protest.  Perhaps it will be a new mug for this new life journey.