When Matthew returned from suburbia with the refrigerator, he commented that he didn’t understand how so many people could afford to live in houses like that.  Out of curiosity, I consulted Zillow to see just how much the refrigerator seller’s McMansion cost.  Here she is, in all her sprawling, conspicuous consumption-filled glory:

First, SEVEN bathrooms?  SEVEN?!?!  Assuming that these people could not be bothered to have their children share a bedroom, and assuming a traditional family unit (two parents plus kids), there would be, AT MOST, six people living in this house.  Six.  Yet there are seven bathrooms?  God forbid anyone have to share a toilet.

Second, I would not live in this house, in this location, if you PAID me half a million dollars.

Third, the sellers were asking $200 for the 8-year-old, albeit very lightly used (if they were telling the truth), refrigerator.  I offered $150, partially to factor in the cost of renting a truck to pick it up.  The seller said $175 was the lowest she could go.  Really?!?  You live in a half-million-plus dollar house and you need to squeeze me for that extra $25?

Aside from that, the phrase flashing in my head was “drive until you qualify.”

“Drive until you qualify” is a real estate phrase, based on the historical trend of real estate prices being generally higher in city centers, with decreasing home prices with increasing distance, or “[a phenomenon] whereby potential homebuyers travel away from the workplace until they reach a community in which they can afford to buy a home that meets their standards” (source).

This post on “The Creation of a ‘Drive to Qualify’ World,” explains how this happened:

. . . the connection between suburbia and cheaper housing is not a law of nature: to the extent that it is true, it is true because of public policies.  Throughout America, on both the Left and the Right, it is an unstated assumption that of course, energy and transportation should be cheap, while housing should be more expensive every year.

The most obvious public subsidy to transportation is the use of general tax revenue to support new roads and public transit systems that extend into suburbia.  In addition, government tries to keep energy cheap- not just by failing to tax externalities of energy use such as pollution, but also by encouraging energy production . . . . Even though gasoline costs have increased over the past few years, they are still cheap enough to make auotmobile-dependent suburbs affordable for many.

For comparison, I searched Zillow for some similar homes (5+ bedrooms, 5+ baths) within city limits: 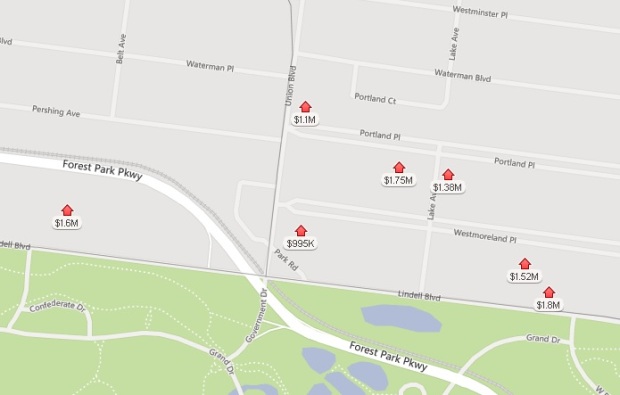 To be fair, this is a VERY desirable part of St. Louis City (and one of the only neighborhoods in the city with this concentration of highly priced real estate), but you can see that for my CL seller to have a similar house in an urban, rather than suburban area, it would likely cost more than twice as much (though the historical homes mapped here are also much more home than the subdivision houses will ever be).

The hundreds of 4000+ square foot McMansions in these south county subdivisions can’t possibly all be housing big families.  Most probably have four or five (at most six) occupants.

The people who live in these subdivisions require motor vehicles to get anywhere of note (my seller had three late-model luxury cars — yay for her!), yet “people with longer commuting time report systematically lower subjective well-being” (source).  Not to mention the real physical health costs of a long car commute.

Despite the perceived notion of suburban living being “cheaper,” that is often not the case, once you factor in the cost of owning and operating a motor vehicle (see “Why Your Daily Commute is Making You Poor“).

It makes me sick that these types of developments were allowed to occur in the first place, given the up-front and on-going environmental costs, but they’ve clearly been driven by consumer demand for these showy, excessively-sized houses.

This seems nothing short of shameful, given the number of people living in poverty.  It highlights the growing economic gap, as well as a disconnect with the reality and impacts of our lifestyle choices.

In case you missed it in the comments on yesterday’s post, EcoCatLady shared some uplifting development-related news.  Perhaps all is not lost . . . .