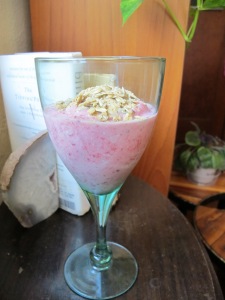 I kicked off the weekend with a strawberry banana smoothie, made with frozen local berries, homemade yogurt from local milk, and The Last Banana, recovered from the depths of the freezer, served in a green glass.

Delicacy or discard?  That funky looking growth is huitlacoche, a fungus that grows on corn (known in the U.S. as “corn smut”).  It’s edible, and in Mexico, it fetches a high price, much higher than the corn itself.  Matthew handled the prep work.  I avoided touching it until he cooked it.  (If he’d been feeling ornery, he could have chased me around the apartment, threatening to touch me with it.)  Once cooked, it looked and tasted much like any other cooked fungus (i.e., mushroom).  Click here to read more details, including potential health benefits.

At my urging, Matthew bought a tomato at the farmers’ market.  (He liked the idea of our first tomato of the season being from our garden, but we’re not quite there yet — soon!)  Dressed up with basil (courtesy of our neighbors’ plant — hope they won’t mind 😉 ), olive oil, and s&p.  Yum! 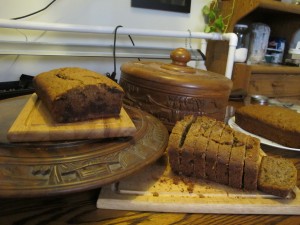 Partial results of another oven extravaganza: zucchini bread and chocolate chip pumpkin bread.  I have not purchased bananas for a year-and-a-half, due to their large carbon footprint (which gives you a sense of the age of the banana that went into the aforementioned smoothie).  As predicted, these two quick breads make great alternatives to banana bread.

3 Responses to Summer eats and treats