While I generally prefer to let the color of my food speak for itself, I’ve long been curious about using real food instead of food coloring.*

With the holiday of pink and red right around the corner, I set out to make some edible Valentine’s — heart-shaped gingerbread cookies with beet-pink buttercream frosting.

A little digging uncovered two main approaches to using beets to color frosting: 1) juice the beets or 2) stir chunks of beets (which can easily be removed when their work is finished) into the frosting.  We don’t have a juicer, so option number two was the obvious winner.

I headed to the kitchen, where I thoroughly washed my freshly harvested beet, then cut half of it into ten small chunks.  I tossed a few chunks in with my white buttercream and began to stir.

After a few minutes, I saw some results, but realized that partially cooked beet chunks would yield more juice, and thus more color.  I tossed six of the chunks into a ramekin, added a teaspoon of water, and microwaved it (covered) for a minute or so.

After cooling, I tossed the cooked beets and a bit of the juice into my frosting, which obligingly turned a lovely shade of pink. 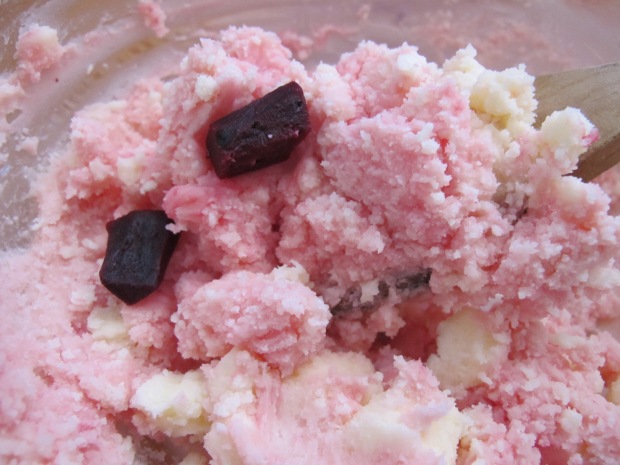 For the frosting, I used our basic tried-and-true buttercream recipe, with equal weights butter and sifter powdered sugar, plus vanilla and almond extracts.  Half of a smallish beet produced the color here for a recipe with a pound of butter and a pound of powdered sugar.

For comparison, I had a small amount of frosting colored with good ol’ Red #40 and Red #3: beet on the left, artificial coloring on the right. 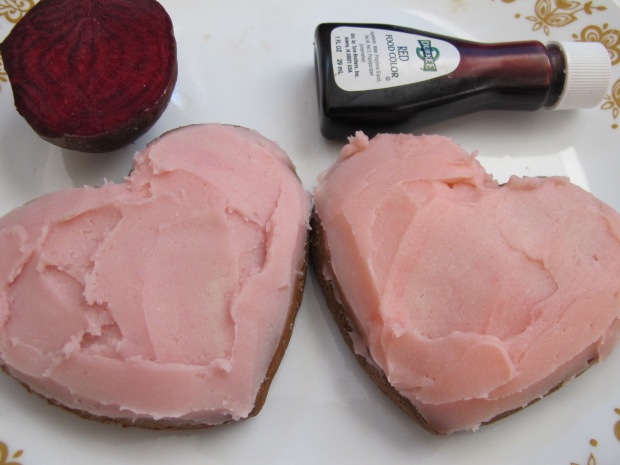 In case you’re wondering, you can’t taste the beet at all.

*While consuming small amounts of artificial food dye is probably not a big deal, I prefer to avoid them as much as possible, and, frankly, really deep-colored frosting with tons of dye just tastes disgusting.