Today, I set out to test the Roadrunner’s cargo capacity, seeing if she was up to a grocery run.  We have a grocery store just over a mile away that I use for small, weekly needs, but I keep a running list of bulk items, as well as other groceries that are a particularly good buy at either Whole Foods or Trader Joe’s.

The two stores are near each other, and, if possible, I make the trip (which happens about every 1.5 months), when I’m already planning to be in that neck of the woods with the car.  I usually return with six (or more) very loaded grocery bags, something my regular bike was not up to, at least not without the trailer (and the trailer wouldn’t fit on MetroLink (our light rail system)).

With the reduced cargo capacity of our side-loader bags, due to the Yepp childseat, I wasn’t sure how Roadrunner would do on this trip, but it was time for a test.

The trip started with a nice 2.5 mile ride to the MetroLink station.  I wheeled Roadrunner up the ramp and onto the train . . .

. . . and it was a perfect fit!  With the center kickstand deployed, the front wheel was hanging out over the stairwell, and she was pretty darn stable.

I almost thought I could sit down and leave her there, but the movement of the train meant that she need a little bracing every now and then.  Ten minutes and four stops later, we de-trained at the Richmond Heights stop and cruised down Brentwood Blvd. to WF.

My biggest hurdle this trip was time, as I had under 2.5 hours for both transit and shopping.  Well, that, and not letting my eyes get bigger than my cargo space.  The need for speed forced me to stick to my shopping list, which minimized the size of my load. 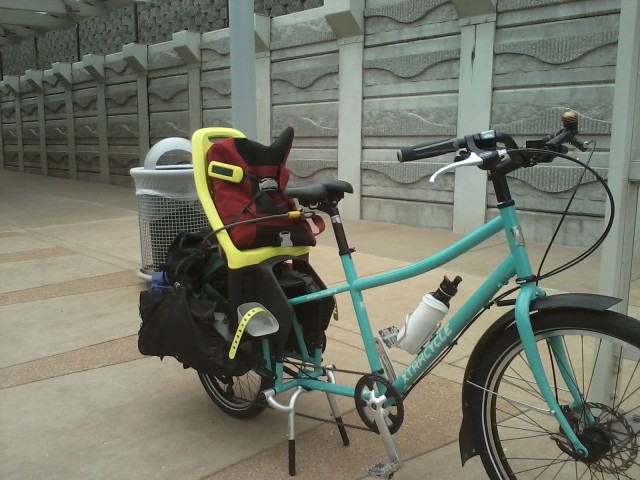 All appearances to the contrary, that trash can is not part of my cargo.

The WF haul consisted of bulk bin items and a couple of dairy products (those are in the insulated bag strapped into the child seat).  The bill (under $100!) confirmed that it was a rather light shopping trip, but I bought everything on my list.

Next stop, Trader Joe’s.  Next dilemma — leave my WF groceries on the bike, or carry everything in with me to TJ?  I compromised by bringing the insulated bag in with me, but leaving the two bags of dry goods in the side-loader bags with the bike.  Happily, they were there waiting for me when I returned with two more bags from TJ’s. 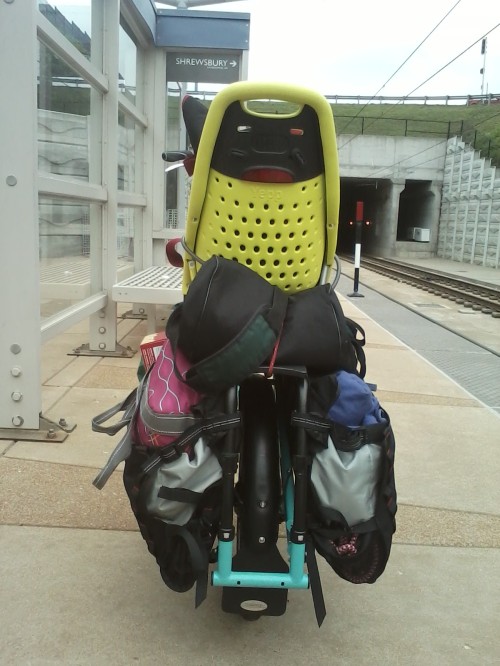 I thought I would have more strapped onto the rack behind the Yepp seat, but my duffle bag was mostly empty. 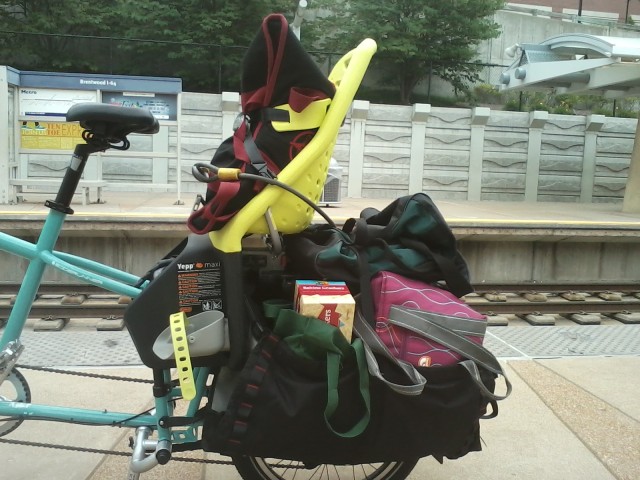 Verdict: Roadrunner hauled everything on my list, and had room for more, but perhaps not ALL that much more, with our current set-up.  A milk crate on the back would be convenient for grocery trips, but I would want a way to take it on and off easily, because the rack is convenient for some items.  The Yepp seat could be removed, but I really don’t want to take it on and off all of the time, and I can make use of the space in the seat.

The ride home, fully loaded, was not really all that different from an empty bike, and once again, everything went smoothly on MetroLink.  To be fair, my groceries probably weighed in under 50 pounds (or not much over), making the total cargo not that much more than carrying Sir on the bike, but there’s nothing wrong with starting small.  I also managed to make the trip in just under my 2.5 hour time limit, so success on all fronts!

This entry was posted in Biking and tagged cargo, go by bike, longtail. Bookmark the permalink.