While I kicked off Bike Month yesterday with a distinct lack of biking (and a car trip at that!), I finished April with three consecutive days on the bike.

Sunday morning I biked to church with Sir for the first time.  The usual timing of services there has not been conducive to biking with him, or really to bringing him at all, but for last Sunday’s ministry fair, they rolled the 8am and 10am services together into a single 9am service — perfect timing for biking there, socializing afterward, and biking back without danger of Sir turning into a pumpkin.

Monday I rode across town to meet Matthew for Gokul’s lunch buffet.  I biked there directly from a dentist appointment, and by “directly,” I mean I was feeling too lazy to backtrack to the route I usually would have taken into Forest Park or to put in the mental energy to figure out another alternative to riding on Hampton Avenue, the most direct route and what I would have traveled without question had I been in car, so I just biked the 2.5 miles north from Chippewa to Forest Park on Hampton.

Most of the time, I only use big roads for short, connecting stretches when I’m driving my bike, but this longer trip worked out quite well (which is rather what I expected when I made my decision).  I pedaled along quite happily in the right lane, while motorists had one to two other lanes to use.

I arrived in good time, and we enjoyed the delicious vegetarian Indian offerings before Matthew biked back to work and I continued on to an appointment.

Tuesday morning, Sir and I headed out bright and early.  We quickly covered the few miles to the playground in Tower Grove Park, where we spent the morning with a friend and her son (and saw another biking mama and son duo).  We also swung by Local Harvest Grocery, where my relatively small purchase of broccoli, rice, and celery pushed my cargo capacity to the max!

After biking in the heat on Monday and Tuesday and the slightly higher mileage of Monday, I didn’t mind a break yesterday, though I would have been just as happy to limit our outings to those we made by foot (the playground and the gym).  However, I’ve been meaning to get BUB in for a tune-up for a number of weeks now.  I’ve been loathe to do so, since it means using the trailer with my other bike, rather than our beloved front seat for Sir until BUB returns.

While a well-maintained bike is ALWAYS important for safety, I am extra conscious of it with a little passenger, so I bit the bullet, loaded BUB on the bike rack, and drove to the bike shop.  I could have BUB back as soon as this afternoon, but since I have another bike to ride, I’ll avoid the one-stop car trip and wait until this weekend when Matthew will be in the vicinity of the bike shop for gardening anyway.

As a final Bike Month note, local blogger Jessica at City in a Jar challenged herself to go car free for the month of May.  She’s inviting YOU to join her, even if for just a day, or heck, a single trip, where you try biking, walking, or using public transit.  So what are you waiting for?  Let’s ride!

One of my favorite parts of biking with Gabriel in the IBert front seat is having him right there in between my arms, making for easy, constant interaction as we travel, both pointing out interesting sights to one another.

For the past ten months (since we first started using the seat), I’ve been chanting, “Go, Mama, go!” as we ride uphill, in an attempt to get him to pick up the chant and provide some motivation when my energy is flagging.  Little did I know that I would have a late talker on my hands.

The months passed, and aside from increased babble, we had nothing.  Around the nineteen-month mark, he said, “Gogogo!” while sledding, one of his first words.  I had to wait a couple more months for “Mama,” but my name is now a consistent part of his very small vocabulary.

Today as we biked to church, I helped him put the two words together, and, with a bit of prompting, he developed his own version of “Go, Mama, go!”

“Gogogo . . . Mamamama!” often followed by ringing the bike bell.  He can’t help pedal yet, but he might make a pretty decent cheerleader!

Oh, and another cool part of the ride — we spotted another cycling family.  A mom and her two girls, one daughter on a trail-a-bike and the other on her own bike, riding on Tower Grove Avenue, using lane positioning that indicated they were savvy cyclists.

While the number of families that use bicycles for transportation in St. Louis is growing, at this point it’s still a rare enough sight to be cause for excitement.  We exchanged waves and bell rings as we continued on our way.

Since January, Sara over at Life’s a Bear has been collecting photos of people on bicycles as part of her #everydayonabike challenge as a way to motivate her own efforts and to “encourage others to consider biking as and easy and fun and empowering way to get around.”  Couldn’t have said it better!

I’ve been meaning to participate, and with yesterday afternoon’s beautiful bike outing at the park, I finally got around to taking a photo.  The only catch?  She’s collecting photos using Instagram.

I’ve never used Instagram, but I thought it would be a simple matter of going to the website and signing up for an account (like Twitter).  Not so much — apparently, you to have one of them fancy IPhones or androids or tablets or whatever them kids are usin’ these days.

Regardless of the fact that our computer seemed to think it was a tablet, it doesn’t want to play with Instagram (I wasted much precious time figuring this out, of course).  And my basic, no-frills, no-data-plan, talk and text only phone is definitely out.

So, without further ado, here is my attempt to participate in #everydayonabike.

Have you been out on your bike yet this month?

True to my word, I’ve spent some time over the past few weeks digging into bike-related blogs.  If my recent food-to-bike posting ratio is any indication, I have indeed found the inspiration I sought.

I’ve mentioned it here before, but one NOT new to me bike blog is Simply Bike.  S. and I both biked through our pregnancies, and her daughter C. is just a couple months younger than Gabriel, so I feel like we’ve been figuring out this whole biking with babies thing together.

I used S’s blogroll as a jumping-off point in my bike blog search, which led me to Hum of the City.  Inspired by a vacation in Copenhagen, this San Francisco family returned to the U.S., bought bikes, and later sold their only automobile.  In addition to detailing their adventures as a bicycle family (with two kids), the site contains a wealth of information on different cargo bikes.

Two recent posts that really struck a chord with me are “Yes, but . . . ” that addresses excuses for not giving cycling a try, and “Bicycles and privilege,” a thoughtful look at how, whether we ride bicycles out of choice or necessity, we are not so different.

Over at Tiny Helmets Big Bikes, the Bustamante family chronicle their adventures using bicycles for transportation (and fun!) in Sacramento.  I especially enjoy reading about their travels on the Yuba Mundo, a longtail cargo bike that I’ve been drooling over for about a year now.

Sara over at Life’s a Bear added cycling to her family’s routine fairly recently.  Since January, she’s been collecting photos for her #everydayonabike challenge to encourage others to give bicycle transportation a try (which reminds me that I need to snap a photo one of these days).

I would be remiss if I did not mention Girls and Bicycles (no, not a calendar with pictures of semi-nude women on bicycles, regardless of what Google thinks), a blog I read regularly before I started writing here.  While “stylish cycling” is not so much my thing, seeing Miss Sarah bike through cold snowy Edmonton (Canada) winters makes winter cycling here look like nothing.   And she was on her bike with her son when he was just a few months old — part of my inspiration for wanting to start early with Gabriel.

Finally, I came across this stand-alone guest post, “Becoming a Biking Family.”

While my selections thus far are heavily skewed toward biking families, they run the gamut from cyclists who became parents and incorporated their children into their preferred form of transportation to families who discovered the joy of active transportation together.  Their stories and examples provide inspiration whether you have kids or not (and, heck, if you don’t have kids, you’ve got it easy — you REALLY have no excuse for not giving biking a try).

I know I’ve just scratched the surface here, but, as I don’t have all day to sit around reading bike blogs, no matter how awesome, starting small makes sense.

Matthew has continued selling limited quantities of winter squash to Five Bistro throughout the winter.  For previous deliveries, he dropped by on his way home from the garden in the car. 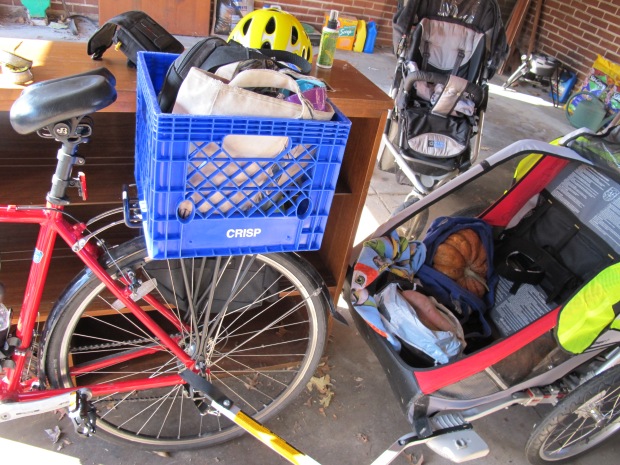 A flatbed trailer would be much better suited to hauling cargo than the child trailer, but I manged to fit the produce AND a passenger.

With a squash on either side of him and sweet potatoes under his feet, Sir was a bit cozy on the way there (about 3 miles, I think), but he didn’t complain.  The delivery went smoothly and we visited a new park before heading home.

Here’s a recent menu item with our squash (in bold):

Fun to see our name on the menu (even if that’s not exactly the squash variety — I’m guessing they chose a simpler, more self-explanatory name for diners?)!

Amazingly enough, I’ve posted every. single. day. this week — pretty much a miracle.  The timing of this post is also amusing, given the inches of snow and ice currently covering our streets — I would not be attempting this delivery today unless I could get there on foot!