On Monday or Tuesday night, Matthew informed me that St. Nick had brought us something extra this year. 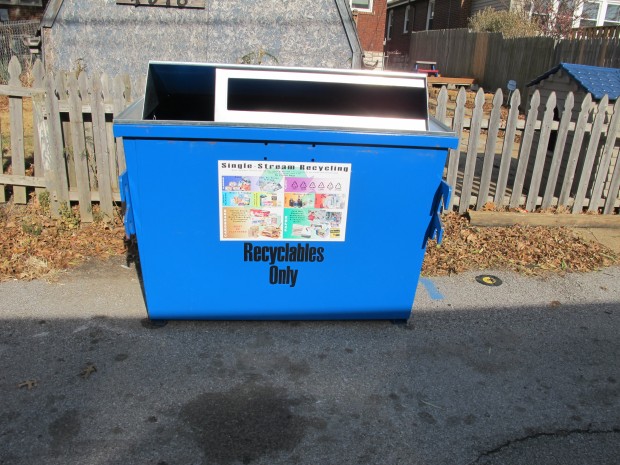 For the last two years, we had curbside recycling pickup, and our landlord paid the low rate that the city subsidized. With the start of the city’s new recycling dumpsters in the alleys, they dropped the subsidized curbside service.

Problem was, the city is rolling out their program slowly, and while some relatively nearby alleys had their bins in November, the only info I had said that they all should be in place by March 2011. I was preparing for the reality of having to drop our recycling off somewhere for up to 4 months (and the idea of driving somewhere to recycle really rubs me the wrong way), so I was super excited to hear the news about the bin in our alley.

The only thing that kept me from running out to see it right when Matthew told me was the fact that I was comfortably curled up on the couch and the temps outside were under 20 degrees.

Despite my excitement, I would be remiss if I did not point out, as I’ve mentioned before, that recycling is only a stop-gap measure, and not an ultimate solution to our problem of over-consumption and too much waste.

Environmental sustainability really depends on us practicing the other R’s: Reduce and Reuse. I’ve also heard mention of a fourth R, Refuse (as in refuse disposable packaging, containers, etc.), which I see as being part of Reduce.