All my bags are packed

Posted on September 15, 2011 by Melissa @ HerGreenLife

I first heard about the new flight service between St. Louis and my hometown at my sister’s baby shower last December, when I was just barely pregnant.  My first  thought was, “Ugh, what a carbon-intensive way to make what is a pretty easy 4-hour car trip.”  Not to be a judgmental enviro-snob or anything 😉

I was quite certain that I would never avail myself of the service, super cheap flights ($30 each way — thank you government subsidies) or no.  Fast forward several months, and we were contemplating a trip to visit my family with Gabriel in tow.

Now, Little G is not particularly fond of the car, which in general is fine with me — I’m not particularly fond of the car, either.  (Even if he loved it and fell asleep instantly,  I would refuse to use it as a sleep aid.  Babies certainly require green compromises, but I have to draw the line somewhere.)  Anyway, the prospect of 4 hours in the car with a screaming baby, plus the additional trip time for stopping to feed him, change his diaper, etc., lacked appeal, but we did want to visit, so the Wednesday before Labor Day found us at the airport.

The trip went very smoothly, i.e., I did not vomit, and it also ended up being a pretty good way to travel with the little one.  He slept almost the whole way there, and on the return flight he was pretty chill once I provided his in-flight beverage. 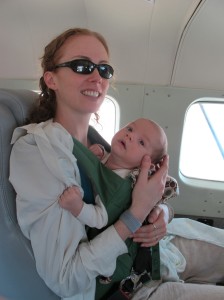 The dude in flight

Had Matthew not really wanted the experience of flying on this little plane, I might have spoken up against it more.  I also realized as we drove to the airport that, given our sleep-deprived state these days, flying was probably MUCH safer than either of us being behind the wheel for four hours.  Benefits aside, though I won’t say that we for sure won’t make the trip by plane again, I definitely don’t intend to make a habit of it, given the environmental cost of air travel.  If we can’t make the trip by car, we may just stick close to home for awhile.

This entry was posted in My Life, Not Green and tagged flying, travel with babies. Bookmark the permalink.

2 Responses to All my bags are packed