As would be expected, the move altered our usual cooking and eating patterns a bit.  I cooked on Friday night, but by Saturday it was time to start saying goodbye to our kitchen.

We planned to go out to eat on Saturday with my mom, who came to see Sir and help pack.  Unfortunately, I came down with the latest disease from Typhoid Gabriel and didn’t really feel like eating much of anything, much less leaving the apartment to do so.  We settled on take-out from Pho Grand.  Not the greenest dining option, giving their use of the standard large polystyrene containers, but desperate times call for desperate measures.

We had a decent supply of leftovers in the fridge, so we worked on lightening that load at both lunch and dinner on Sunday.  We enjoyed a “deconstructed” pumpkin lasagna for lunch (yay for frozen homemade pasta) and a Swiss chard and chickpea dish for dinner.

All bets were off on Monday, our actual moving day.  When lunch rolled around, we’d been up packing and moving for hours.  I picked up some sandwiches and deli-case salads at a nice little deli within walking distance of our new place.

Except I didn’t walk (hangs head in shame).  I was heading back to our old apartment to get Matthew and a last car load, and the deli was more-or-less on a direct route anyway, and it was like eleventy-million degrees outside with high-noon sun, and with a second floor to second floor move, I’d already walked up and down more flights of stairs than I cared to count.  So that’s my excuse for choosing inactive, gas-guzzling transportation. 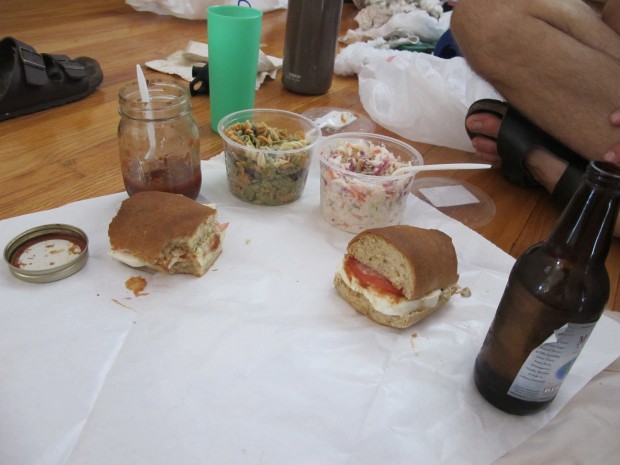 But lunch was good, though, once again, some disposable containers.  Matt’s mom brought us carry-out pizza for dinner.  The pizza box was pretty darn clean, so that at least got recycled.

The garden supplied almost all of the ingredients for Wednesday night’s dinner.  Boiled beets — some cubed for part of the main dish, some thinly sliced for a side with goat cheese.

Potatoes “baked” in the microwave, cubed, and tossed with olive oil and salt to serve as a base for sauteed cabbage with onions [previously] roasted elephant garlic, edamame, and the cubed beet.

The only produce on the plate NOT from the garden was the edamame and the onions (both of which we’re growing but are not ready for harvest yet).