The title of this post is often, though not always, the answer to the question posed in the title of the last post.  Little Pookie likes to eat.  Because of this, he is not so little anymore.

He still breastfeeds four times a day, but I’m not sure that mama’s milk is his favorite food anymore.  Tomatoes have stolen his heart.

Saturday night we had a garden fresh dinner of steamed edamame, braised fingerling potatoes, and gazpacho.  Pookie chowed down big time on the potatoes and edamame, eating almost as much as I did. 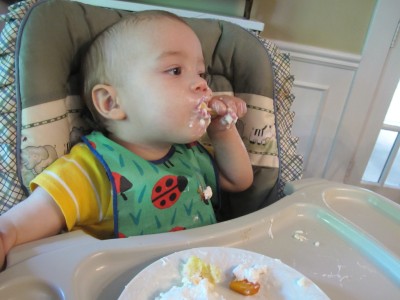 Chowing down on birthday cake

He uses his height to good advantage, getting up on his tip toes and stretching out his little arms to procure items of interest off the table. 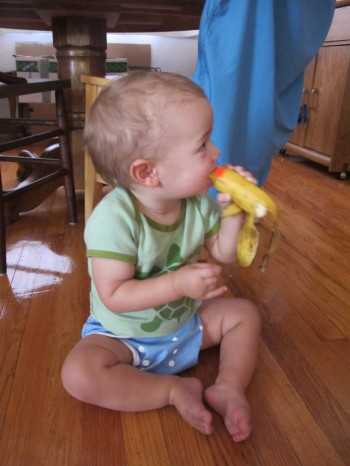 Is this how it works?

He snagged a banana and chomped down, peel and all.

I missed the actual photo op, but snapped the above after the fact, once I removed the smashed tomatoes from his fists and offered him a few cut-up bites as a replacement.

Unfortunately, the tomatoes on the table proved such a distraction at meal times that he had a hard time focusing on the food on his plate.  Oh, little Pookie.

This entry was posted in Cuteness, Food and tagged baby. Bookmark the permalink.