Matthew grew two types of grain corn this year, one for polenta and one for flour.  He harvested a number of lovely ears and removed the kernels, at which point we were stuck.

I attempted to “mill” some of the polenta corn in our food processor, which laughed at my efforts as the kernels spun around making quite a clatter, but coming no closer to becoming corn meal.  Next up was the coffee/spice grinder, which kind-of worked, albeit in very small batches and producing a grain with uneven texture (some almost as fine as flour, but other grains still very coarse).  Due to the presence of the very large grains in the final product, the polenta took over three hours to cook!

Fortunately, a friend has an electric grain mill, and she was willing to let me take it for a test run.  I wasted no time milling all of our corn before returning the mill. 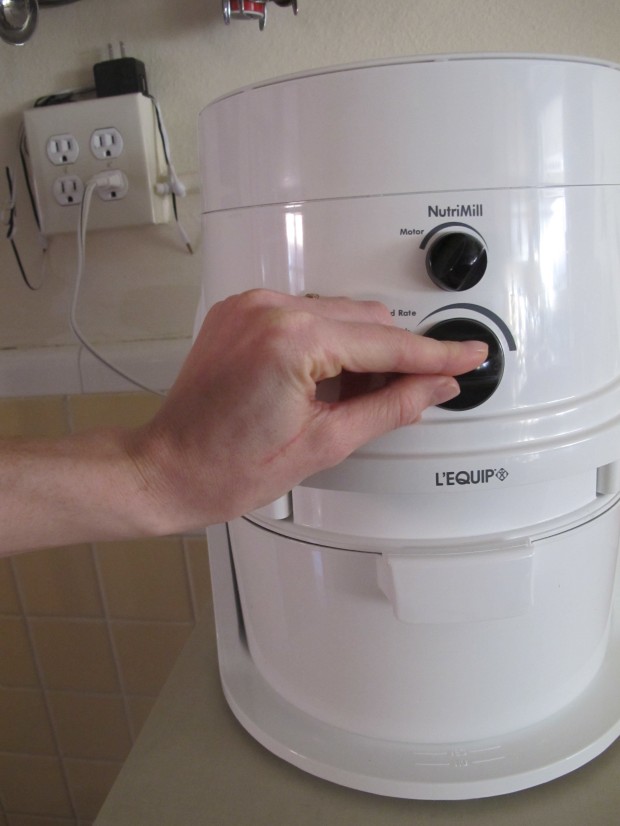 I originally planned to try other [gluten-free] grains after finishing with the corn, but that never happened . . . 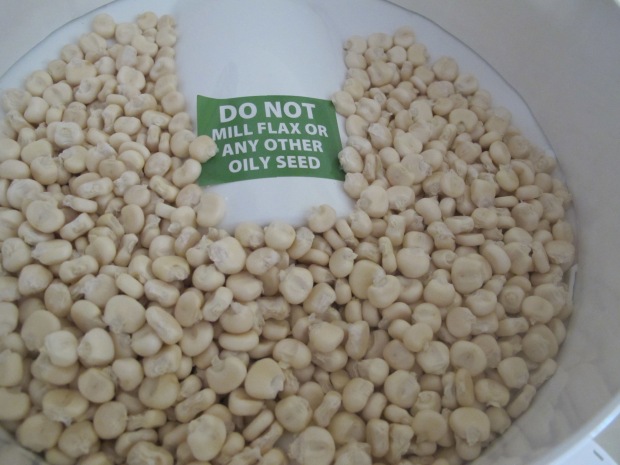 . . . because it literally took hours to get a relatively small amount of corn kernels through the mill.*  The corn kernels (bigger than popcorn kernels) were at about the upper limit as far as size of whole grains that would work in the mill.  I suspected that smaller grains (e.g., rice, quinoa, millet, etc.) would flow through much more quickly, and my friend confirmed this.

Despite the rather ridiculous time input, this was my best option by far for turning the corn kernels into a form we could eat, so I stuck with it.

Even on the coarsest grind and slowest motor setting (which is also supposed to contribute to a coarser grind), the milled “polenta” corn was really too fine for making polenta.  We’ll use it in cornbread and other baking where we would use “fine” corn meal instead.

Similarly, the milled “flour” corn came out much finer than I expected.  Even “fine” corn meal has some grit to it, but this was really more like flour.  Matthew later explained that this was due, in part, to the variety of corn — a type that was a low “flint” level, which is what makes corn meal gritty.

While the idea of being able to turn any whole grain into flour is appealing, an electric grain mill is not on my purchase-soon list, especially with a price tag near $300.

Now that all this corny talk has whetted your appetite, here’s cornbread recipe that I’ve been meaning to share, based on this recipe at Kitchen Parade.  I discovered and adapted this recipe about a year ago, and it quickly became a favorite.

Melt butter in the cast iron skillet to coat, then pour in batter and bake for 15-20 minutes.  Time will vary based on size of skillet.

Note: I most recently made this recipe using our corn “flour” in place of the corn meal.  While the resulting product was quite delicious, the lack of grit in the corn created a product with a texture more like a muffin or cake than traditional corn bread.  In the future, I will use our home-grown corn meal/flour for the 1/2 cup of flour in the recipe, and stick with store-bought, fine corn meal for the 1 1/4 cups of corn meal.

*I was 100% on-board with keeping the mill gluten-free, since my friend’s husband has a gluten sensitivity, and being able to mill their own GF flour was a big reason they bought the mill.  However, this meant that I wasn’t able to try making my own whole wheat Cream of Wheat-esque cereal, something that my oatmeal-shunning hubby wants to try.