Saturday afternoon, temperatures soared into the low 40s.  There was still some slush and ice on our street, but most roads were completely clear, so I headed out for what may have been my last bike ride for a decent while here.

While we didn’t technically need any groceries, we liked the idea of having more eggs and milk on hand.  My first stop was Schnucks (a Missouri grocery chain), which probably would have been a bit crazy on a Saturday afternoon anyway.  Combine that with a forecast of ten inches of snow and sub-zero temps, and you have crazy-town!

Had I driven the car, I would have wasted lots of time and gas circling the packed parking lot waiting for a space.  As it was, I biked right up to my customary cart-return bike lock-up spot.  Talk about prime parking!

Inside the store, my bike helmet doubled as a mini shopping basket.  In addition to soy milk, I grabbed some citrus fruit.  Unfortunately, my choice of transportation didn’t save me from the long check-out lines.  It was interesting to see what other people “needed” to stock up on before the storm.  An employee was going through the lines offering free cookies, in an attempt to appease the masses, I guess.

That crazy ordeal finished, I headed to my much-lower-key second stop, Local Harvest Grocery, for eggs, dairy milk, and steel cut oats.  And our local foodie magazines!  I started to get overheated and had to stop and ditch my coat on the ride home.

After Gabriel woke from his nap, we headed out to play in the last remains of snow in our north-facing front yard. 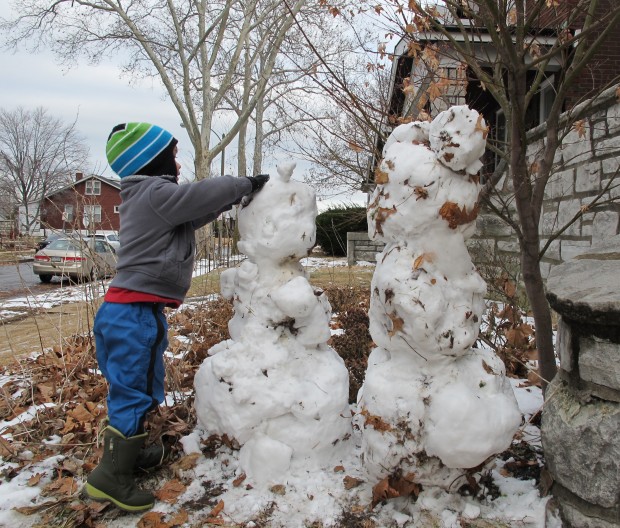 We would have had much more snow to work with on Sunday, but we feared conditions would not be conducive to much outside play time.  Make snow-people while the sun shines, right?

Sunday morning dawned with falling snow and a little boy requesting “out.”  At that point, we still had temperatures in the 20s, so we bundled up and headed out. 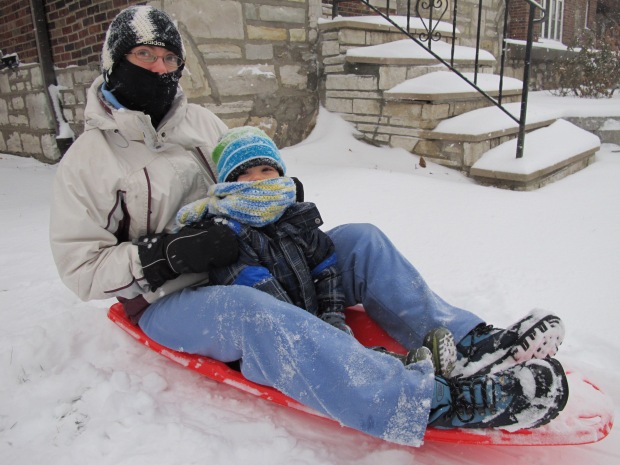 Matthew and I shoveled show and we did some front yard sledding before walking down the street to a slightly larger hill at the park.  We’d already been outside for quite awhile at that point, and Gabriel didn’t last long.

We have a children’s lift-the-flap book about winter fun that ends with the child’s mother showing up with hot cocoa, and when we reach that page and open the flap, Gabriel excitedly proclaims, “Mama!  Ha co-co!”  He needed little coaxing to head inside for his own mug. 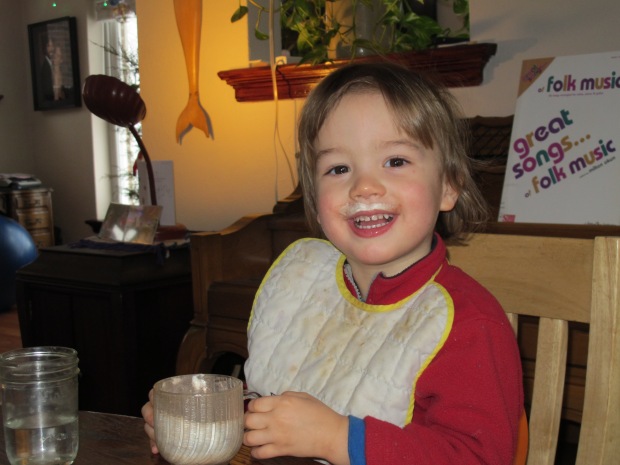 We spent the rest of the day hibernating as the wind picked up and temperatures dropped.  I made a big batch of granola in the morning, and Matthew made an apple pie in the afternoon.

Almost all schools and many businesses are closed today, but Mrs. L was willing to take Gabriel, even though none of the other kids she watches were planning to venture out.  While I wouldn’t have bothered to clear the car or risk driving on these streets, bundling up for the half-block walk to her house was no big deal.

I did end up carrying Gabriel most of the way, due to the high snow drifts (I didn’t think to walk in the tire tracks on the street until I was headed back home).  Matthew bundled up and walked to the bus stop in pre-warmed mittens and boots, where he fortunately had a short wait.  With this much snow on the streets, I’m not sure when we’ll be back on the bikes, but for now, I’m thankful for a warm apartment and being walkable to [some] places.