Given the frequency of snow-pack and ice on the roads, combined with some very cold temps, I spent a significant portion of the winter hibernating, bicycle-wise (and in general — I don’t like driving a car on snowy, icy roads much more than I like biking on said roads, so, when possible, I just avoided going out, unless I could walk to my destination).

I’ve been making up for lost time these past few weeks, logging quite a number of bike trips and racking up the miles.  Instead of having a hard time remembering when I last rode, I know have to think I minute to recall a day when I didn’t ride!

Friday: “Bike to Work Day”
Bike to Work Day is kind-of odd when biking to work is your default, but it’s fun to have a day to officially celebrate our transportation method of choice.  Even though I work from home, we all got in the spirit, and Gabriel and I accompanied Matthew most of the way to work, stopping at one of the official “refueling stations,” before heading to La Patisserie Chouquette for a bakery treat . . . 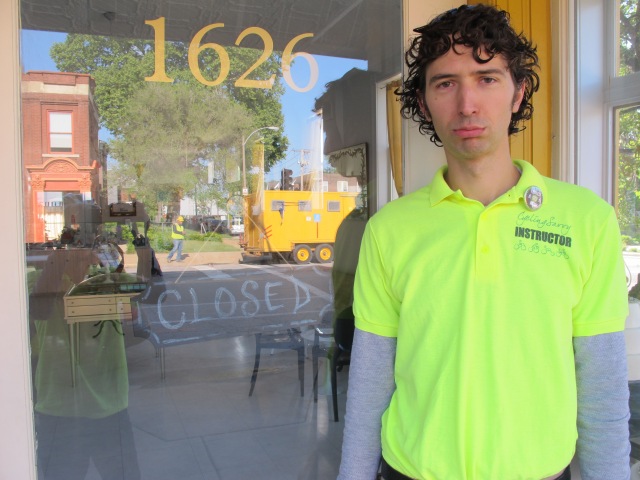 . . . only to find that their hours had changed, and they didn’t open until nine.  Boo, hiss!

We salvaged the outing by biking to Rise Coffee instead, where we were offered a free shot of espresso (for all cyclists on BtW Day).  We’re not coffee drinkers, but the barista was undaunted, and he made us each a honey piccolo (basically a milky, honey-sweetened espresso shot), to accompany our baked goods, which included a delicious rhubarb muffin and a cheddar chive scone, as well as a thumbprint cookie. 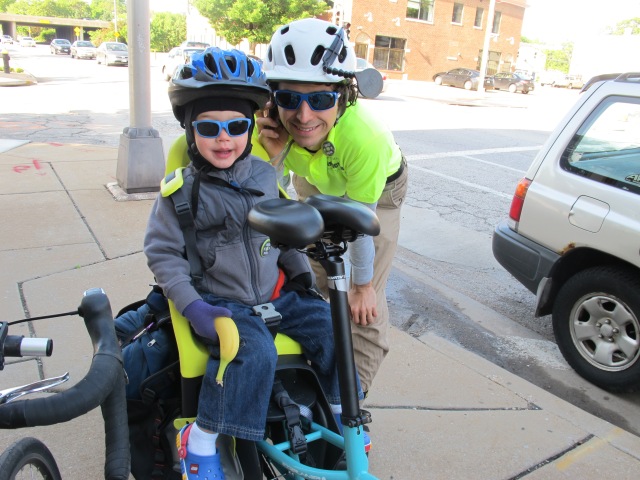 We had our snacks, and then I biked home to work.

Saturday: Velo in the City
Last fall, I met a wonderful CyclingSavvy grad who was starting Velo in the City, a group for like-minded bikey people to meet up and enjoy social rides to various destinations in StL.  The first event-to-be was scheduled for December, but cancelled due to weather, and then we just had months and months of winter weather.

Six months later, Velo in the City had it’s inaugural event, a bike ride to Forest Park, complete with a potluck-style picnic in the park. 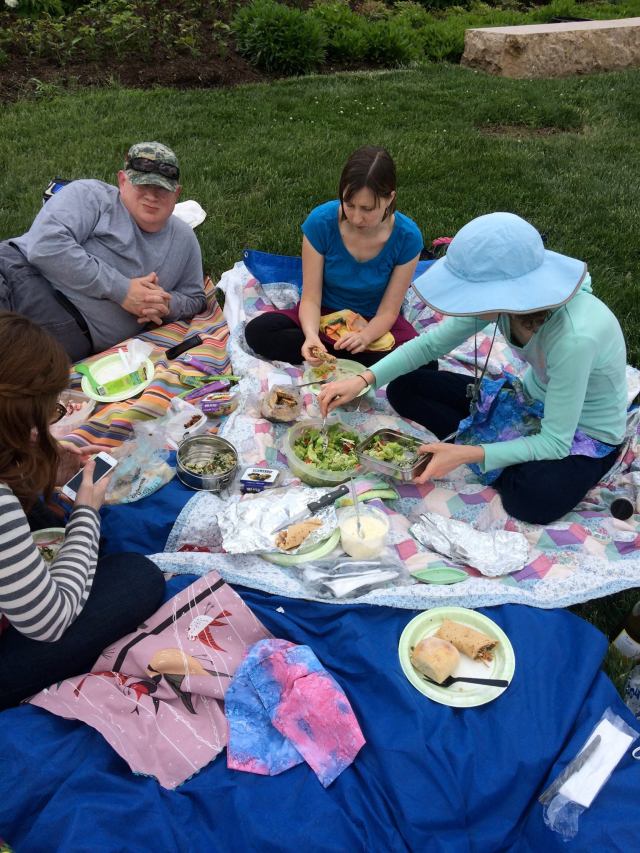 It was a perfect spring day, starting off cool, and warming up, but not getting hot, and the company was great, as was the food.  We also had a birthday to celebrate, and a couldn’t resist a bikey cake!

I felt very content as we chatted and shared food, a nice, comfortable “these are my kind-of people” feeling.  I’m looking forward to future events!

Sunday: Family Day
After Saturday’s lovely ride, I just couldn’t stop thinking about being on the bike.  We had plans for lunch at my FIL’s, which, at four miles away, is a relatively easy ride (both in terms of effort/energy expended and time required), but Matthew wanted to sneak in a couple more hours at the garden (at my MILs, which is 10+ miles).

In the end, I managed both.  Sir and I biked to my FILs first-thing in the morning, left Roadrunner there, and continued on to my MILs by car with Matthew.

This was probably my longest ride on Roadrunner with a passenger, and it included two tough hills — the first one just steep and challenging, and the second, immediately after the first, tough because I’m still recovering from the first hill (this is not unlike the hill situation that either Matthew and I will be tackling regularly in the fall, on the way home from Sir’s preschool).  I made it up both hills, slowly but surely, with my passenger chanting, “Go, Mama, go!”

And more bike
I started the work week with a ride to the community college this morning (part of my circuitous route to possibly applying for SLU’s physician assistant (PA) program), for more tests to prove that I am, in fact, “college ready” (in case my undergraduate degree and my master’s, both from rather good schools, didn’t make that clear), and we’re going by bike to look at a couple of houses this afternoon.  Pedals up and bike on!

This entry was posted in Biking and tagged go by bike. Bookmark the permalink.