I started writing this post on a Monday (my first commute of the spring semester), when the temps started out in the teens, with single digit wind chills.  Four days later, it’s sunny and 60°F in St. Louis — ah, fickle January weather!

On the Monday in question, I helped get Gabriel well-bundled, and then waved goodbye to my biker boys. 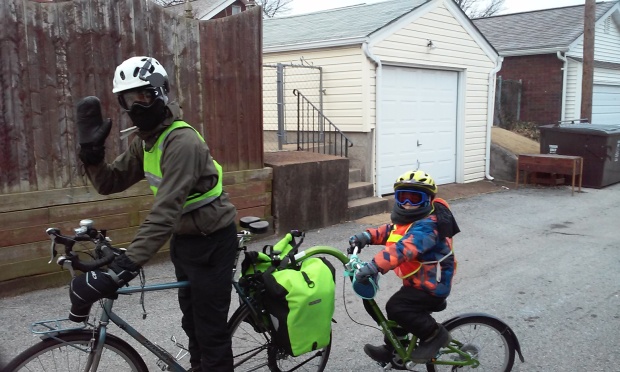 Gabriel reported that everything was still nice and warm when they arrived at his school, which I rather expected, given how many layers he had on.  His mittens were perhaps the weakest link, but Matthew said his fingers were nice and toasty when they un-bundled (G has much better circulation than I do, apparently!).

Later in the day, I put together my cold-weather gear, along with my new pannier-backpack.

For whatever reason, I don’t have great circulation in my hands and feet when it is cold (or even moderately chilly).  Boots and mittens are a bit clunky on the bike, but if I’m going to ride in cold temps, they’re a must! Shifting with the mittens is a bit awkward, but doable.  I was glad it had warmed up a bit by the time I departed, or I’m not sure my fingers would have made it 8 miles, even with good mittens!

I replaced the balaclava I lost at the end of last semester (I’m still planning to check the campus lost and found, but I didn’t want to be without one; on the off chance I find the original, having a back-up won’t hurt).  I was happy that REI still carried the exact same product I bought however-many years ago — if something works, no need to change it.

After cramming our laptop backpack (with no laptop in it) into my grocery-bag panniers all last semester, I started investigating a better solution.  The idea of something that functioned as both a pannier and a backpack was appealing.  I read some old reviews that praised a product made by Timbuktu . . . that is no longer being produced.  I knew I wanted the rack attachment points to be on the OPPOSITE side of the backpack shoulder straps, since the side facing the bike inevitably gets cruddy.  With the Timbuktu pack not an option, Matthew found this pannier/backpack by Banjo Brothers (my Christmas gift from my parents).

While it doesn’t have as many organization options as many backpacks, it does have a few pockets, and it’s plenty workable.  I’ll have to report back on its comfort as a backpack after more testing.

At this point, the only thing I would change is the length of the straps that fasten the top flap over the opening.  With the current design, I can’t fasten the buckles on the flap when the pannier is fully open, instead I have to roll down the top first.  I’m going to look into getting some kind of strap extender to remedy this.

On school days, I’m using this on one side and one of the old grocery-bag panniers on the other side.  The backpack carries my school stuff plus bike lights and tool kit.  The open pannier carries my purse, insulated lunch bag, U-lock, and cable.

Despite not having ridden my commute route (or all that much otherwise) for a few weeks, Monday’s commute went well.  These next couple of months have the potential to bring some of the trickiest weather for biking, but I’m hoping my biking:motoring ratio for this semester will be as good as it was last semester!