During the summer between my junior and senior years of college, I worked as a live-in nanny for a family in New Jersey.  Food-wise, it was a summer of firsts for me.  I’d never been big on seafood (perhaps rightfully so, having grown up in the Midwest), but in those months living on the East Coast, I enjoyed trying scallops and various types of fish.

My seafood eating days were short lived, as I became a vegetarian and stopped eating meat and seafood entirely a few months into my senior year of college.  However, not all was lost from that summer, food-inspiration-wise, as the family I worked for introduced me to the joy of broiled (or grilled) asparagus.

While enjoyable (if not overcooked), steamed or boiled asparagus doesn’t hold a candle to the broiled version.  I’ve used this preparation for every single stalk of our delicious, if modest, asparagus harvest this year (minus those stalks nibbled raw).  Sir usually devours his portion and begs for more from our plates.

Asparagus is in-season NOW, so head to the nearest farmers’ market this weekend, and enjoy some fresh, locally grown goodness!

Brush asparagus stalks with generous olive oil, then sprinkle lightly with sea salt and other seasonings, if desired.

Cook under hot broiler for 10-12 minutes, stirring once to turn the stalks.  Serve immediately. 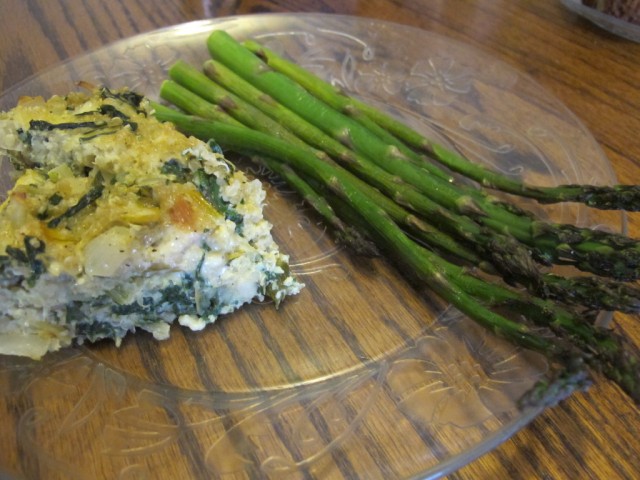 Toaster oven vs. Oven vs. Grill
If you’re preparing 1-3 servings, a toaster oven is the perfect tool.  It heats up quickly without heating the entire house.  A counter-top grill functions similarly.  For a larger crowd, fire up the broiler in your regular oven.

A hot grill produces a similar effect to the broiler, with the addition of a smoky flavor. We don’t use the grill all that often, and it’s not worth firing it up just to cook asparagus.  If you’re grilling other food anyway, this is a great option — just toss the spears directly on the grill (perpendicular to the grates so the spears don’t fall into the fire).

This entry was posted in Food, Garden, Recipes and tagged Asparagus. Bookmark the permalink.