Shhhhhh . . . don’t tell Pookie, but the toy bicycles I ordered for him arrived.

While I’m excited for him to begin playing with them (and thus address his utter lack of toy bicycles), the kid doesn’t have any shortage of toys in general, and Easter isn’t that far away.  I think I can hold out for a few weeks.

I actually had to distract him when the packages arrived; he wanted to open them immediately.  I waited until he wasn’t around, which was just as well, because I opened the package to find this.

Some assembly required, apparently.  It all just snapped together, no tools required.  I did have to refer to the pictures a couple of times since it did not include directions for assembly, but in just a few minutes, we were ready to ride. 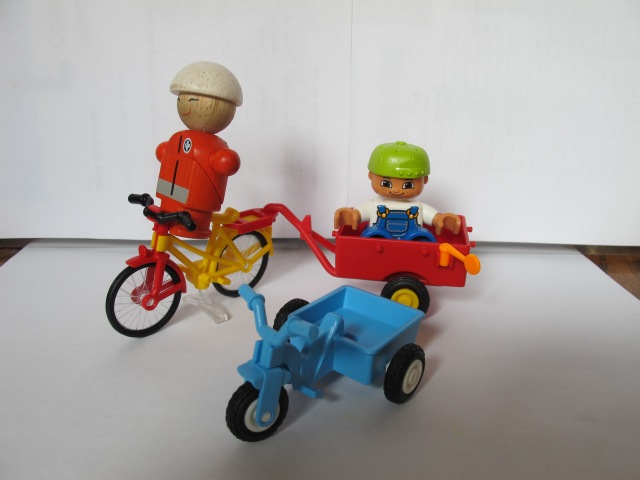 I assembled this set, which did not include Playmobil people first.  I was hoping the bicycles would work with his Lego Duplo people (pictured in the trailer) and some other little wooden people we have (pictured riding the bike), but they don’t really fit on the bicycles.

I was feeling a little bummed, until I looked at the other set I ordered.  It conveniently came with three Playmobil people . . . 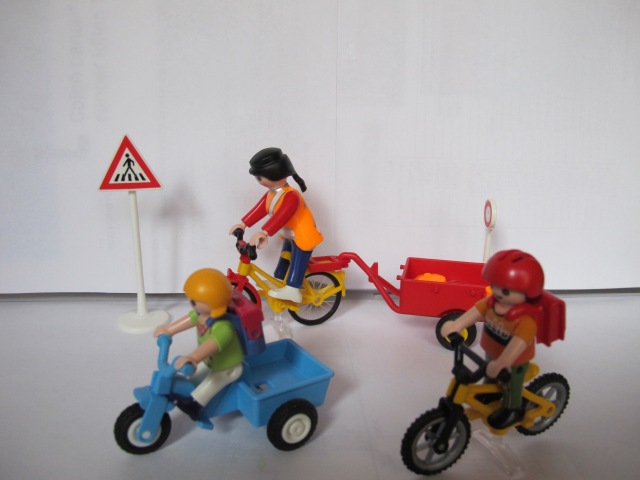 . . . for a total of 3 bikes and 3 people between the two sets.  It actually could not have worked out more perfectly:  there is one adult for the one “adult-sized” bike and two kid for the two kid-sized bikes.

Gabriel is right at the age where he’s getting more creative with his play, and starting to incorporate some story lines.  I look forward to people on bikes being part of that play!

Note: These are marked as age 3+, and, since they come apart, there are definitely small parts involved.  I would really have been fine giving these to Gabriel at age 2, with supervision, especially because he’s never really been the sort to put [non-food] stuff in his mouth.

This entry was posted in Biking and tagged bicycle culture, toddler, toy bicycle. Bookmark the permalink.