Last week ended on a bit of a down note, with some not-so-great news that set us back in our plans to buy a longtail cargo bike.  We’re somewhat back to the drawing board and once again weighing options on that front.  Had that not happened, I might have been out and about on a sweet new ride this morning.

As it was, we headed out on the trusty BUB plus IBert front seat combo for a nice visit to the Botanical Garden.  It was a bit chilly, but in a good way — definitely not complaining, especially with scorching summer heat right around the corner! 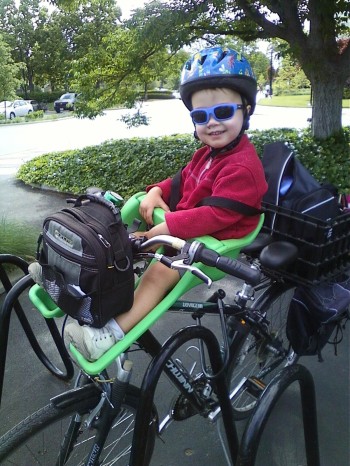 After visiting the sheep, we continued on to the raccoons.  He discovered them on our last garden visit, and they’ve quickly become a new favorite. 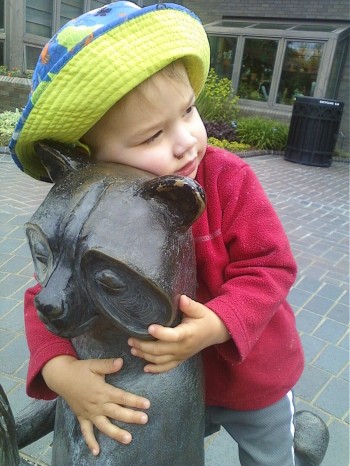 Backtracking a bit, we all spent Saturday at the garden, arriving at 8 a.m. and not leaving until almost five (Sir and me).  Someone else stayed until almost seven!  ‘Tis the danger of a commuter garden and a number of consecutive rainy and/or ground-too-wet-to-work Saturdays.

I forgot the camera, but we really whipped things into shape, with tons of weeding followed by mulching with decomposing leaves from the compost pile.  I was a bit of a slacker, choosing the less-tedious, more instant gratification tasks of weeding and mulching the fennel and potatoes.  I just couldn’t face the four by a million foot onion and leek bed, filled with tiny onion and leek plants which were easily outnumbered by weeds — props to Matthew for his work here!

Sunday found us tired and sore, so we started the day with a low-key family ride to the park.  Sir attempted to walk down a slide (or some such), and did a number on his face, which is surprisingly well-hidden in the above photos.  Later in the morning, we headed out to brunch with cohousing friends before returning for a lazy evening.

In addition to regular daily “stuff,” I’ve been packing for Sir’s trip to Florida.  He leaves tomorrow and we’ll be apart for NINE whole days!

Tonight marks the end of our twenty-two-and-a-half month breastfeeding journey (more on food and weaning in an upcoming post) — definitely bittersweet that it’s coming to an end . . . .

That about wraps up the last week, so I’ll catch you later!