It took a good 5-6 days of being stuck between Central time and Pacific time (so, Mountain time, technically), but we’re more or less back to our regular routine around here.  Now it’s time to review our trip before I forget anything important.

Lodging
We stayed in four different houses/apartments over the course of eleven days in Oregon.  We started in a VRBO house just southwest of Mt. Tabor in Portland.  After three nights, we moved to a VRBO apartment in the Buckman neighborhood of Portland.  We loved this location — very central for biking, plus some things within walking distance — and we were here for five nights.

At that point, we headed out of Portland for a couple of days.  Our road trip took us to a VRBO cabin in Prospect, Oregon, just south of Crater Lake.  That was our home for two nights as we explored both Crater Lake and the abundance of amazing waterfalls in the area, many of which are quite easily accessible (i.e., short walks/hikes that were relatively easy for Gabriel and my MIL).

We stayed in Portland at my SIL’s apartment for the final night of our trip.

Transportation
While in Portland, we mostly got around by bike, other than the trip from and to the airport.  We shared a rental car with Matthew’s mom.  My MIL shouldered most of the work of shuttling other people around in the car, and we enjoyed most of our time in Portland car-free.*

Over the course of six days (not counting the bike-free day when we drove to Silver Falls), we put in 60 bicycle miles in Portland.  Our highest mileage day was 14 miles, and our lowest was 9 miles.  If anything, I expected those numbers to be higher.  It felt like we were all around the town.  I guess the lower than expected mileage is a testament to Portland’s density? 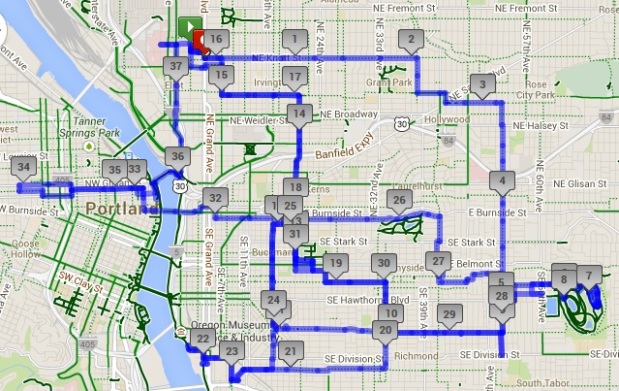 We covered a lot of southeast Portland, some of northeast, and a bit of northwest.

For us, the rental car was essential for our day hike at Silver Falls State Park and the side trip to Crater Lake, and it was nice for getting to/from the airport (but we could have taken a cab), and otherwise a huge PITA (long wait for pick-up at the airport, then arguing that we had reserved/needed a 4-door vehicle vs. the 2-door they were trying to stick us with, then having to swap cars after two days due to brake and electrical issues).

Food
While we were in Portland, we were on the “bakery-a-day” plan (good thing we were doing all that biking!).  The bulk of our pastries came from Ken’s Artisan Bakery and St. Honoré Boulangerie.  At Ken’s, we love the Oregon croissant (though we weren’t quite as impressed this trip, compared to last time), the vegetable quiche, and the cannele.  At St. Honoré, we love the mirliton (a small tart, filled with almond batter and fruit — two years ago we had pear; this trip, they had cherry, which was amazing!) and the cannele; we also had a nice chocolate croissant here.

We tried one new bakery this trip, Crema.  Matthew liked their fruit danishes, though I wasn’t amazed (not enough cream cheesy filling and too much of a sweet glaze — I like my pastries barely sweet).  I enjoyed a piece of their chocolate espresso bread (heavy on the chocolate, light on the espresso).

Outside of bakeries, my favorite food came from Pad Thai Kitchen (on SE Belmont), Boke Bowl, and ¿Por Que No? Taqueria.  We ate at another Thai place and a French place that were okay, but not remarkable.  It is quite possible that we spent as much money at bakeries over the course of the trip as we did on food at restaurants.

The other food highlight that I should mention is the delicious paella served at my SIL’s wedding, from none other than a catering place that makes only paella.  They knocked the vegetarian version out of the park with delicious white beans, mushrooms, artichokes, and other veggies.

Because we had full kitchens at all of our places, we also did a decent bit of eating in, which helped budget-wise, and nutrition-wise, too (ensuring we ate at least some beans and had some grain variety).  This option was also very nice in Prospect, where dining options were limited (grocery options were also quite limited in the area around Crater Lake, so plan accordingly).

Things to do
So, what did we do other than riding our bikes from bakery to bakery?  Mostly lots of low-key stuff.

We visited a couple of playgrounds with Gabriel — easy, free, and fun way to pass time with a little one.

Other than renting the Bullitt, our only paid entertainment was a visit to the Oregon Museum of Science and Industry (OMSI), which felt like a blend of the Science Museum and the Magic House in St. Louis (paid admission, unlike our Science Center).  You could probably spend an entire day at OMSI, but our visit was limited to just a couple of hours, which, after torturing Gabriel by walking through the [to him terrifying] dinosaur exhibit, were mostly spent in the Science Playground, a wing just for the 6-and-under crowd. 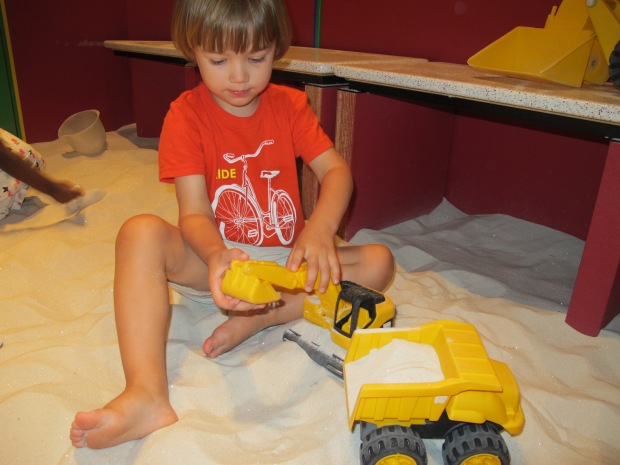 The Science Playground had a sandbox!  With construction equipment!  Sir was in heaven.

We did a bit of shopping in the stores around the 3500 block of SE Hawthorne, as well as a quick visit to Powell’s books in downtown Portland.  (I was disappointed to discover Powell’s was not just used books, but rather a mix of new and used.  They also don’t have a “used” section; rather, the used books are mixed in with the new, and, at least for children’s books, their offerings seemed to skew heavily toward new.)

Most of our remaining time was spent with family and new friends, celebrating my SIL’s wedding (for which Gabriel was a ring bearer).

That’s all for now, though I have at least two more trip-related posts, one on Crater Lake and one on bike infrastructure in Portland (I made myself take pictures this time around!).

*Between the rental car and the borrowed bikes, we didn’t end up using public transit, but a friend told me that Portland has a great app that makes it very easy for a visitor to use the system to get around (assuming you have a smart phone).