Who says you can’t ride a bike when it’s 100 million degrees outside? (Spoiler alert: I should have stuck with the bike and avoided the car.)

For better (we had a bunch of great students!) or worse, our cooler than average summer lulled us into thinking we could get away with an end-of-August CyclingSavvy workshop. 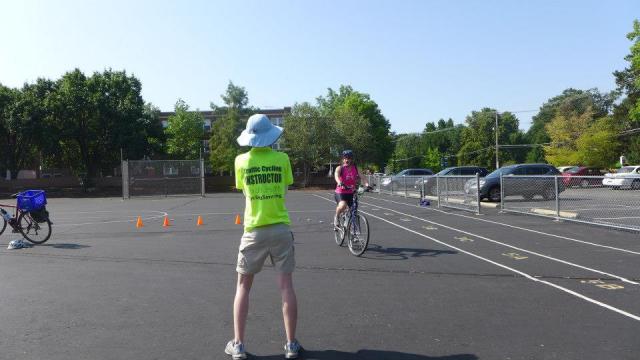 We did get away with it, but it was HOT.  With forecasts for actual temperatures just shy of 100°F, and heat indices of up to 110°F, we made a last-minute change, and instead of doing both on-bike portions on Saturday, as originally planned, we split things up to take advantage of the “cooler” (you know, just 90°F and 110% humidity) morning temperatures.

So, on Saturday morning, I biked about 5.5 miles to our class location.  I’d looked up bus times in case I wanted to bus part of the way home, but we finished up right around 11am, and I was still feeling pretty good.  I made it home, where I planned to wimp-out and drive the car to our class starting point on Sunday.

For context: Saturday’s session (Train Your Bike) involved a lot of on-bike time for students, but, other than demonstrating a few things, not much on-bike time for instructors, so even with biking both ways, I probably topped out around 12 or 13 miles on Saturday.  In contrast, the Road Tour involves everyone (instructors and students) biking 10-12 miles.  These are very slow miles, with a lot of long breaks throughout, but still.  If I biked both to and from class, plus the route, I would have logged almost 25 miles on Sunday, including the return trip at peak sun and near-peak heat.

Sunday dawned, and Matthew really wanted the car to take Gabriel out to Cedar Hill to see his cousin and her new baby.  I reluctantly ceded the car, and biked the few blocks to the bus stop.  The bus-bike combo halved my time on the bike, leaving me just a couple of miles through Forest Park to our meeting point.

Unfortunately, the bus doesn’t run all that often on Sundays, and while it worked to get me to class, I wasn’t confident the timing would work as well on the way home, especially because we didn’t know exactly when we’d finish.

I was concerned that by the time the tour ended (around 12:30pm, after I’d put in about 18 miles in the heat), I really wouldn’t be in shape to safely bike home.

So I decided to bum a ride, and asked a student who doesn’t live too far from me if he’d mind giving me (and my bike) a lift, at least as far as his place.  He kindly agreed.

We rolled back into the parking lot just after 12:30pm.  It was HOT, but everyone made it! After a bit of finagling, we managed to get both bikes on the [trunk] bike rack on his car, and we headed out, both ready for a shower and some A/C.

We were stopped at a stop sign when, WHAM! Rear-ended.*

I’ve always been paranoid about transporting my bike on my car for the very reason demonstrated yesterday.  If you have an accident while your bike is on your car, you potentially lose TWO (or more, if multiple bikes) of your vehicles in one swoop!

In this case, it was not my car, but the guy who was giving me a ride home was not so lucky.

Fortunately, all of the people involved are okay-ish (though my neck is not so happy today), but the bikes, not so much.

I dropped Baby Jake off at the shop this morning.  They’ll give me an estimate for parts and labor for repairing the [significant] damage (it will be in the hundreds), and we’ll go from there.  They will also check to see if the frame is bent — if so, it’s replace for sure.  If not, we’ll see how the repair costs look.

The irony, of course, is that with the way events unfolded, I neither got home faster, nor spent less time outside by opting to ride in the car instead of just biking home (we could have waited in the car, but it didn’t have A/C, so sitting outside in the shade was cooler).  And now my bike is out of commission.

*The circumstances seem pretty cut-and-dried to me, and all indications are that this will be resolved quickly and easily, but I’ll follow advice I was given to not go into too many details of the collision until all is said and done.

This entry was posted in Biking. Bookmark the permalink.